WATCH: While stormy weather typically makes people want to curl up in front of the fireplace that?s not the case for surfers who see this weather as a recipe for good waves. And as Luisa Alvarez reports the forecast Thursday morning was looking like a surfers paradise predicting waves as big as 10 meters.

There?s something about being out on the open ocean and riding the waves. Surfers will tell you it’s a feeling they crave to chase.

” You’re in synergy with that energy and even if it’s for five seconds it’s exhilarating,” said competitive surfer and blackfish team rider Lise Richards.

And no matter the temperature surfers on Vancouver Island brave the cold for a chance to ride some waves.

” You’ve got lots a neoprene on you have gloves you have boots and if you’re paddling hard and moving around you’ll be okay,? said Richards.

With the forecast for Thursday morning looking promising and the surf model showing waves 10 meters high, surfers flocked along the coastline past Sooke craving the rage of the ocean.

” It’s the ever-changing nature of it the fact that it’s never the same,” said surfer Bonnie Wright.

But the morning started off slow and the waves were not even close to the size the model was predicting. But surfers stayed positive. Hoping and expecting mother nature to pick it up and show them what she’s got.

” If you just wait it out normally you can find something good,? said Richards.
They didn’t have to wait long before the waves started to get bigger.

? This is just the residual of the big wind and storm last night but yeah, it is cleaning up I think as we look at it,? said Wright.

And just like that, a little more action in the water was enough to get surfers in their wetsuits and running towards the water. Although the waves didn’t quite hit 10 meters as expected nobody was disappointed.

? A bad day of surfing is better than a good day at work,” said surfer Ryan Oglof. 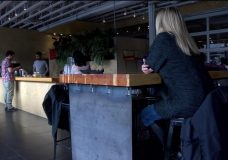 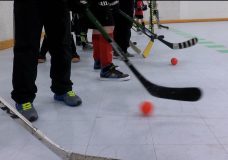 Ball Hockey is big for kids in the Capital