WATCH: A weekend storm has beached several vessels on Vancouver Island. Calvin To takes a look at how local residents are reacting.

The day after a storm battered parts of Vancouver Island, local residents have found several vessels beached at both Cadboro Bay and Tsehum Harbour.

Eric Dahli, chair of the Cadboro Bay Residents Association, was on hand Monday morning as crews from C-Tow tried to free a 20-tonne vessel — one of two that had been swept ashore sometime over the weekend.

The incident brought back memories of six derelict vessels that had previously sat there for quite some time, ruining the view and posing a hazard to children, locals say.

Crews were unsuccessful on Monday. The company said it would try again Wednesday at 8 a.m. as they need to avoid high winds on Tuesday.

In Sidney, local fisherman Jordie McDermid and resident Steve Johnson were looking over two derelict boats sitting on the beach at Tsehum Harbour.

One was missing a propeller. The other did not have a mast and appeared to have been registered in Washington.

The two men say it’s an occurrence that happens every year.

A third vessel beached nearby was a powerboat owned by the Ellis family. They are currently out of the country and said it is scheduled to be removed by Tuesday morning. 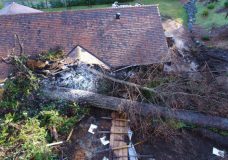 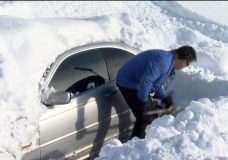