WATCH:  A Washington state group is recommending a ban on the commercial whale watching of southern resident killer whales. The move aims to reduce boat traffic near orcas,  one of several factors hurting the struggling and endangered southern resident killer whales.  Researchers who study underwater acoustics say cutting down boat noise is a critical step so orcas can find their food because the white noise created by vessels makes it difficult for orcas to hunt for their preferred food source: chinook salmon. But whale watching operators say they’ve worked tirelessly for years to protect the southern residents.

At Victoria’s Inner Harbour, a boatload of tourists were ready to head out on the water to see some whales on Wednesday.

There are 32 whale watching companies based in Victoria, and operating in the Salish Sea. But the entire industry may be in for a dramatic change.

Chris Genovali is the executive director of the Raincoast Conservation Foundation and said they are happy with the recommendation.

“It’s gotten to a point, where if we are not willing to take the necessary measures, we’re not going to have this population of whales at some point. And that would be a tragic loss for everyone,” Genovali said.

With more than 20 years leading commercial whale watching expeditions, Skipper Mark Malleson said a ban is not the solution to the crisis affecting the southern residents.

“I think it’s ridiculous. I think that the whale watching is a great attribute to the scientific community. And the awareness to the world of what’s out here,” Malleson said.

There are 32 whale watching companies operating in the Salish Sea. They work closely with their U.S. counterparts to ensure the southern resident killer whales are protected from harassment. The recommendation came out of the blue, according to Brett Soberg, co-owner of Eagle Wing Whale Watching.

“Very much a surprise. And we look forward to having further conversation with the orca task force, and the governor to find out exactly what those details are. And how we can practically apply that in our industry,” Soberg said. 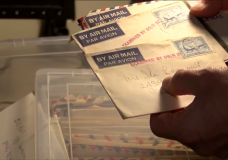 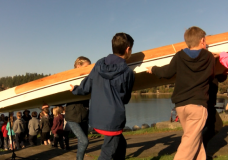