“Can I see you, can I look at you?” Pagliericci asked a man laying on the sidewalk, covered in blankets.

Because as of Tuesday, there was no warming centre opened by the City of Nanaimo to keep the hundreds living in alleys and doorways out of the cold during the day. No place to keep warm despite the frigid cold, winds and snow of Tuesday’s storm intensifying.

“So many places could be opened, so very many,” said Miles Anderson, who has identified as a homeless resident of Nanaimo for years.

So volunteers from the social group Risebridge took matters into their own hands Tuesday, opening an emergency daytime shelter at their Prideaux and Albert Street location. The group is desperate to help those freezing on the streets when overnight shelters are closed.

“We’re opening up a warming centre because clearly there’s a desperate need for it in Nanaimo,” said Risebridge member and volunteer Tori Davies.

“The fact that we don’t have shelter space is infuriating especially for outreach workers, support workers who are tirelessly working to support these individuals,” said Jovan Johnson, executive director of Risebridge.

The warming centre was pulled off entirely with community donations and volunteers, since the city still hadn’t approved its funding.

“We opened this morning, on a last minute volunteer effort just due to the snow and we really hope that we hear something from the city or province by tomorrow or the next day to be able to help us effectively run operations,” said Johnson.

“And we’re going to tell everybody we see that they’ve got to get up there if they need to get warm,” said Kris Josefsson, a community safety worker with the City of Nanaimo.

“There are so many people that have nowhere to go that have been pushed out of their housing that can no longer afford it. So it’s closer to home than I think most people realize,” said Davies.

With the first winter storm of the season hitting with force, the community is racing to respond in time 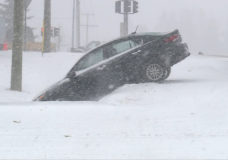 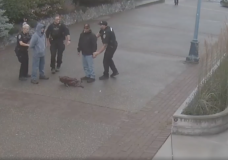