Muirhead House in Victoria, which was badly damaged from a fire back in April 2020, is now undergoing renovations to restore it to its former glory.

The home, located at 223 Robert Street in Victoria West, is a heritage house and national historic site that was built in 1903.

“I love heritage buildings and I love the challenge they bring,” said Ben Schweitzer of EPIC Project Management.

“We have all these new codes and everything which are great, but it’s very hard to make something that’s not conforming conform. So finding the right path through that is the most challenging part. I love heritage buildings and I love the challenge they bring.”

Things like new seismic codes mean parts of the structure, like the old brick chimneys, are going to have to be altered heavily, but the project managers say it’s worth it.

“The Muirhead family was a little bit of a legacy with their mill. And this entire neighbourhood,” said Schweitzer.

“[James McLaren Muirhead’s] brother lived [close]. His parents lived around the corner, they had an orchard in between, it kind of tells the story of this entire community. And it’s a bit of a lost style of architecture. It is a Queen Anne style, at the tail end of when that was cool.”

Owner Jim Lee first restored the building after acquiring it in 1976.

“I’ve been doing this for 44 years,” he said. “The craftsmanship, the woodwork, everything is so custom. They don’t build them like this anymore.”

Insurance will only cover about half of the project, however, so they started a GoFundMe.

“We thought we would pick a couple of aspects of the house, that are important for the history of the building, the image it has the and effect it has on the neighbourhood,” said Schweitzer.

“Like the tower and the entranceway, we thought we would give them the opportunity to support, if not financially, morally.”

The GoFundMe can be found here. 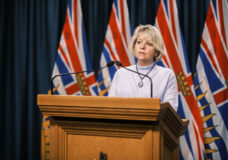 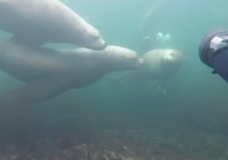 'It was once in a lifetime': Nanaimo man swarmed by sea lions during epic dive