A group of Victoria grandmothers plan to bike thousands of kilometres for a good cause.

Roughly 45 women who are over the age of 55  and are part of a group called the Victoria Grandmothers for Africa (VG4A) will cycle a combined total of 18,107 kilometres from Aug. 17 until Sept. 13.

It’s all part of Victoria Grandmothers for Africa’s annual cycle tour, a fundraising initiative for the Stephen Lewis Foundation’s Grandmothers to Grandmothers campaign, which supports the work of African grandmothers caring for children orphaned by HIV and AIDS.

Victoria Grandmothers for Africa first formed in 2006. A year later the group held their first cycle tour from Campbell River to Victoria, raising $16,000 for the Grandmothers to Grandmothers campaign.

Christine Scott, joined the Victoria chapter in 2007, said the group was looking for ways to promote their cause and raise money when one of them came up with the idea of a bike ride.

“One of our grandmothers, one of our members said ‘why don’t we think about a bike ride?'” recalls Scott.

VG4A cycle tour is divided into six sections that are roughly 3,000 kilometres in length. Participants commit to riding a certain distance and although they cycle independently, they are part of a larger team that must ride a combined 3,000 kilometres.

But with COVID-19 pandemic still ongoing, this year’s ride will look a little different.

“Obviously we can’t ride on the road in large groups, and stay in hotels, and eat in restaurants,” says Scott, who has committed to riding 600 kilometres this year.

Instead, the group has decided to ride a combined 18,107 kilometers this year.

“That’s the distance between the most northerly project in Ethiopia that the Stephen Lewis Foundation supports, and the most southerly in South Africa,” adds Scott.

Linda Mills, 75, is the least experienced rider in the group. Until a few months ago, she hadn’t been on a bicycle since the 1970s.

“I never had a bike as a kid,” says Mills. “I rode in my thirties for about five years and now I’m 75 and I’m relearning. It turns out to be a really good thing to be pushed out of your comfort zone, which I certainly have been.”

Since the first annual cycle tour was held in 2007, the Victoria chapter has raised more than $1.3 million.

Lisbie Rae, 76, knows firsthand what kind of a difference that amount of money can make in Africa.

“I was one of the lucky ones that got to go to Africa with the Stephen Lewis Foundation,” says Rae. “I watched and listened to, and hugged, grandmothers from 15 different countries. It broke my heart and it totally inspired me to make this my retirement project. I’m going to keep doing this until I can’t get on a bike anymore.”

The VG4A cycle tour is open to women who are 55 or older as of Dec. 31. Participants do not need to be a member of the Stephen Lewis Foundation Grandmothers group to register. To learn more, donate or pledge as a rider, visit www.victoriagrandmothersforafrica.ca. 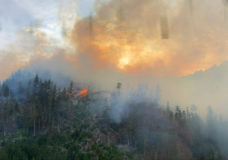 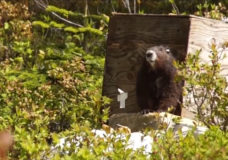 Foundation keeping close tabs on wildfire near Nanaimo due to marmots