December 7, 2019 updated
Chek
WatchThe unemployment rate went up in Victoria slightly last month but across the country, it was even worse.

November was a rough month for the Canadian economy.

Stats Canada says that over 71,000 jobs were lost nationwide last month, driving the unemployment rate up to 5.9 percent, the highest since August of last year.

However here in Victoria things appear to be different.

“We have in Victoria been among the lowest in the country for a few years now we battle it out with Quebec City, but even with these new numbers, we’re still very low in our unemployment rate,” said Greater Victoria Chamber of Commerce CEO Catherine Holt.

That unemployment rate currently sits at 3.5 per cent, the third lowest in the country. But as far as local business owners are concerned, those numbers don’t paint the whole picture.

And for other parts of the Island, the economy is far from alright. With the Western Forest Products strike now into its fifth month, resource-based towns such as Port McNeill are feeling the effects.

“You don’t have to be milling lumber or anything like that, everybody is touched by this because we are a resource-based community,” said Port McNeill Mayor Gaby Wickstrom.

But even with all these recent developments, the province remains firm that the economy is strong, and will remain that way for the foreseeable future.

“What was reassuring today was to hear from the economic forecast council once again that expect British Columbia to lead the way when it comes to our strength in our economy, our diversification, the fact that our employment numbers continue to be strong,” said Finance Minister Carole James.

B.C. has had the lowest unemployment rate in Canada for the past two years and finished November at 4.8%. 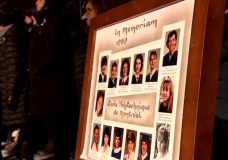