Victoria baby is battling a disease so rare, fewer than 50 cases have been reported worldwide

With her happy squeals and sparkling eyes, it’s hard to believe 10-month-old baby Olivia McDonald is living a medical nightmare.

Olivia has been receiving around the clock care at Victoria General Hospital after being diagnosed with a genetic disease so rare it has been identified in fewer than 50 people worldwide.

“It’s a pretty horrible disease to have and to even be third party and watch your child go through this, it can be pretty traumatizing,” said Olivia’s mother Gloria McDonald.

After a healthy pregnancy and happy, healthy first few months, this summer Olivia became lethargic and wouldn’t wake up from a nap.

“She started vomiting and was unresponsive while doing it so of course, I called 911,” said Gloria.

She ended up at BC Children’s Hospital in Vancouver where genetic tests determined she had Tango2 gene deletion. Only discovered two years ago, it wreaks havoc on the body’s cells and can cause muscle breakdown, seizures, and even heart failure.

“Because it presents differently in each kid we don’t know what it’s going to look like for her,” said Gloria.

Some patients only live a few months with the disease — at least one person has lived to 25. Very little is known about it in the medical community, and the first study has only recently been launched.

“They are trying to collect medical records of every known case of Tango2,” said Kasha Morris, head of the Tango2 Research Foundation in Connecticut and mother of a 17-year-old son with the disease.

“What they’ve gone through, what might have triggered it, what might have helped them through it, what things went wrong, didn’t end well…that’s going to provide some information in a relatively short term that could help kids,” she said of the study underway at Baylor College of Medicine.

Olivia’s parents are facing their new role as medical caregivers with incredible strength, expertly changing feeding tubes while also providing the comfort and reassurance only a mom and dad can.

With little idea of what their daughter’s future holds, they hope raising awareness about Tango2 will lead to more research quickly.

“We know there’s a clock ticking for these children we just don’t know how fast it’s ticking so we want to do whatever we can as quickly as we can,” said Morris.

For now, Gloria and Chris McDonald are just trying to embrace the good times and they hope it will encourage other parents to do the same.

“If you have a child that is healthy, just love every moment of it,” said Gloria.

If you would like to donate to the McDonald family a GoFundMe campaign can be found here. 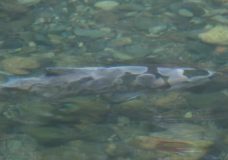