Police are investigating a report of a 12-year-old boy who was attacked by a stranger while biking to school Wednesday morning.

The boy was riding his bike near the area of Devonshire and Fairview roads between 8 and 8:30 a.m. when he was “suddenly grabbed and pulled from his bike” by the man, according to police.

He fell to the ground and shielded his face as the man stood over him and tried to grab his backpack.

A second person, believed to be a man, pulled the attacker away and told the boy to get on his bike and leave, the 12-year-old told police.

He rode his bike the rest of the way to school and his family informed police later Wednesday afternoon after they learned what had happened. The boy was not physically injured.

“It’s concerning…This is a child in our community that was assaulted by a stranger so we will exhaust all the avenues we have to gather more information,” said Const. Cam MacIntyre with Victoria Police.

Police are now trying to track down the man who intervened as they attempt to identify the attacker. They’re also asking parents in the area to be vigilant.

“The bystander that intervened has not come forward, so it’s a little bit unclear as to his role and his relationship to the original suspect in this file,” added MacIntyre. “Where he was completely unknown and a good samaritan or there was a relationship, we don’t know.”

A suspect description was not available and officers are also looking for any additional witnesses.

Meanwhile, residents of the neighbourhood are feeling concerned for their own children.

“It’s horrible and terrifying, we were just in the same area working out with our babies and it’s awful to think something like that could happen to them as well,” said Anna Lefsrud, a mother who lives nearby. 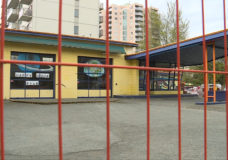 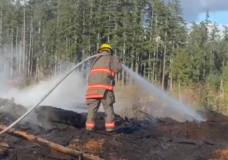