Ukrainian refugees arrive in Nanaimo after fleeing their homes in February

Having just arrived in Nanaimo, Ukrainian refugee Uliana Malorodenko has pictures on her phone of her, her husband and her 15-year-old daughter’s frightening escape from where they lived near Kyiv.

The war has even destroyed their home.

They managed to drive to the border in late February and crossed into Poland but saw many signs of the war along the way.

Bridges were bombed behind them as they made their way out of Kyiv over to Lviv, then finally across the border into Poland.

“We are here. There is no good there,” said Malorodenko through tears.

Last night they arrived at Victoria International Airport after flying from Poland.

They have work visas after two months of getting their paperwork in order.

A happy reunion for her Ukrainian sister and 15-year-old nephew who arrived in Nanaimo from Poland a week ago.

“So we are very happy that our sister came here with her family and now they are here,” said Natalya Tkachyshyn, her sister who lived in Lviv before the war.

All five will be staying together in a north Nanaimo home.

Their host family had a spare suite and bedrooms in their basement and when the war broke out, “I just felt I needed to,” said Cidailia Plevetic.

A GoFundMe has helped with the cost of flights but finances to help the family adjust to life here are still needed.

“We’ve had a few people make some generous donations. That was really nice but there’s still a long way to go,” said Plevetic.

The sisters say they are grateful for what Canadians have been doing to help Ukrainians.

“Canada has helped a lot because it gave people the opportunity to escape from the war in between the air attacks that are happening,” said Malorodenko.

Their future in Canada is filled with uncertainty.

They say their hearts are still very much with their homeland.

A week ago a number of Ukrainian refugees arrived at a resort in Sooke. 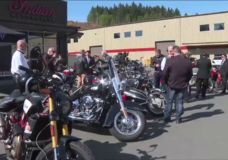 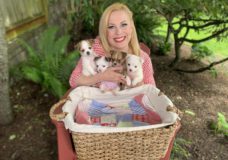