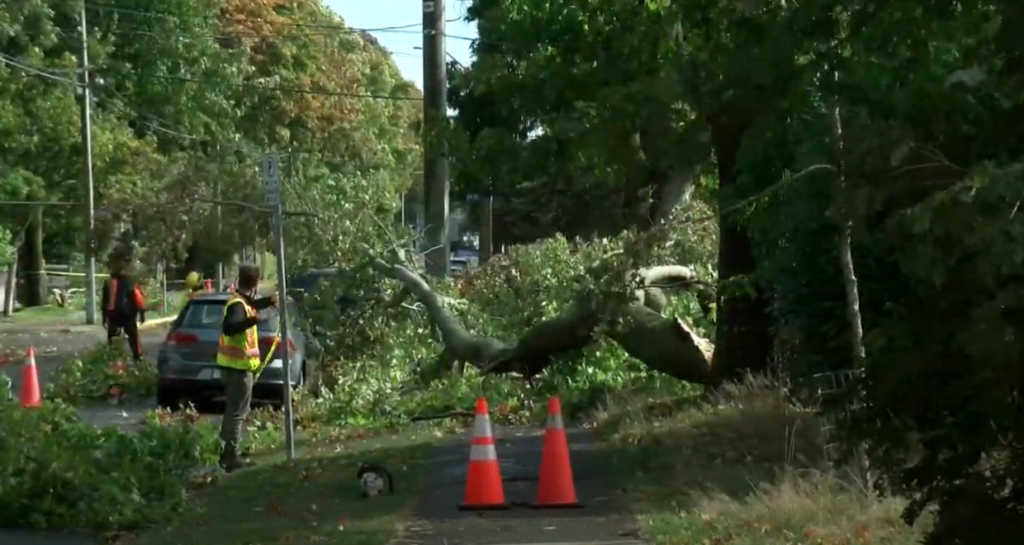 File Photo
Although the wind warning issued by Environment Canada on Tuesday is no longer in effect, thousands of Vancouver Island residents are still without power.

Although the wind warning issued by Environment Canada on Tuesday is no longer in effect, thousands of Vancouver Island residents are still without power.

On Wednesday morning, BC Hydro indicates there is a wide array of outages all across Vancouver Island as crews work to get the lights back on.

It appears the most common reason for the continued loss of power is due to trees down across wires, according to BC Hydro’s outage map.

Severe winds ripped across Vancouver Island, resulting in a multitude of trees and branches toppling over including one in the 1800-block of Neil Street in Saanich and one near Central Park in Victoria.

Trees were knocked down in Cobble Hill as well, leaving roughly 200 customers are without power in the area.

Also in the Cowichan Valley, a tree reportedly fell on a vehicle along the Trans-Canada Highway. No one was hurt according to witnesses, who told CHEK News the incident happened in the southbound lanes of the highway near Koksilah Road.

BC Hydro said there is extensive damage caused by branches and trees breaking and coming into contact with BC Hydro’s electrical infrastructure. All available BC Hydro crews and contractor crews are working around-the-clock to repair damaged power lines, poles and transformers to restore the power.

BC Hydro is reminding the public a downed power line is considered an emergency situation. Members of the public should stay at least 10 metres back and call 911 immediately.

According to BC Hydro, the hardest-hit areas continue to be Duncan, Crofton, Cowichan Bay, Cayuse, Cobble Hill, and Mill Bay and we have additional crews arriving to assist with restoration efforts in the area.

Crews are expecting all customers to be restored on Vancouver Island by Wednesday evening.