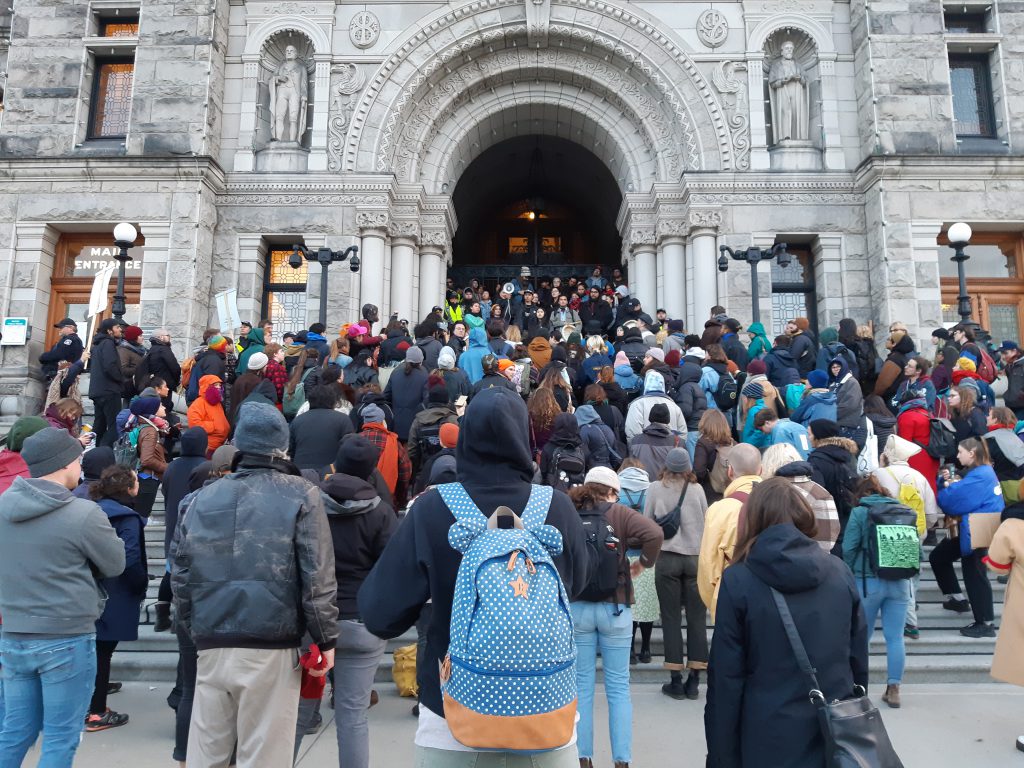 CHEK
Demonstrators at the rally for Wet'suwet'en and Tyendinaga occupy the steps of the B.C. legislature on Feb. 24, 2020.

Supporters of Wet’suwet’en hereditary chiefs and Tyendinaga Mohawks are occupying the steps at the front of the legislature building in Victoria.

There are around 200 protesters at the B.C. legislature, with some on the steps at the front of the legislature. The protesters say they plan to stay for at least a week.

Victoria police said they are at the legislature because protesters have returned to the steps.

Our officers are on scene at the Legislature as protesters have returned to the steps. #yyj #F208353

VicPD said they are also bringing a police van to the legislature driveway to keep officers warm, adding that it’s not a precursor to arrests.

We're bringing one of our vans to the Legislature driveway. This is to keep our officers warm – it's chilly down there. This is NOT a precursor to arrests. #yyj #F208353

There is an injunction in place obtained by the province on Feb. 13, two days after Wetsuwet’en supporters blocked the entrances to the B.C. legislature. The injunction states protesters are restrained from blocking or physically obstructing the access to the legislature, including public roadways.

Officials have previously said protesters are allowed on the steps. 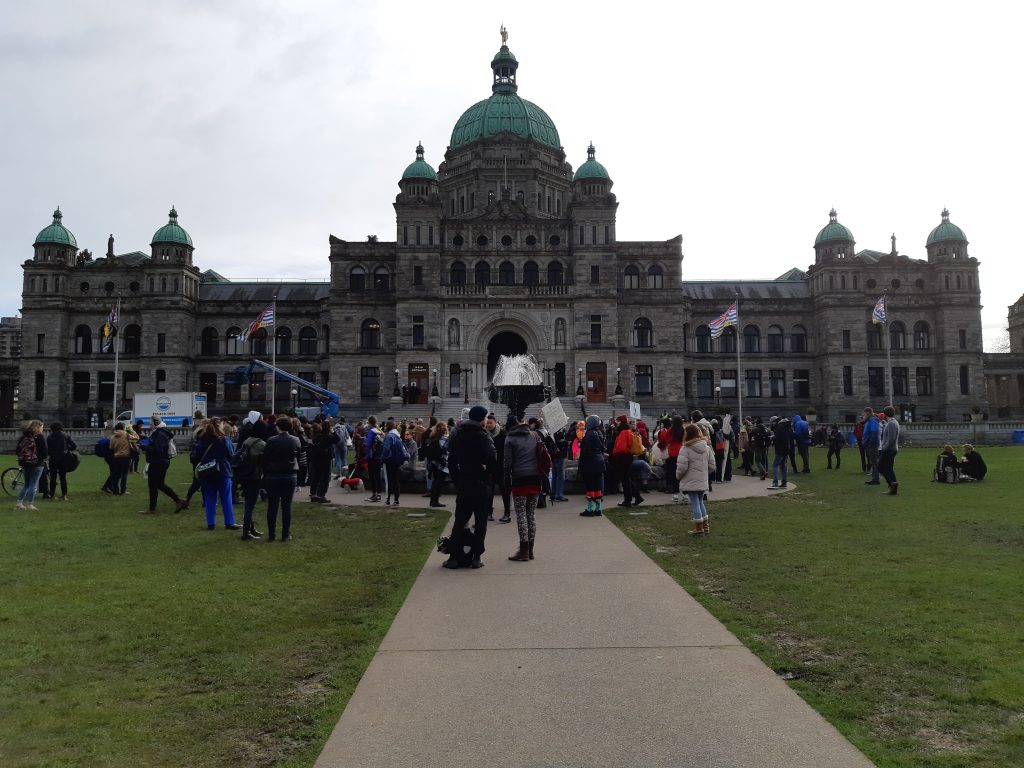 “The Wetsuwet’en have called for further actions to stand with them in solidarity and hold the federal and provincial governments accountable as the RCMP continue to be present on their territories. We will stand with the Wet’suwet’en until the RCMP and CGL are off the Yintah and Wet’suwet’en law and governance is respected and upheld. The Mohawks of Tyendinaga have also established that they will continue to block trains through their territory until the demands of the Wet’suwet’en chiefs have been met. They too are now under threat of RCMP raid,” the organizers wrote on Facebook.

“We recognize that the work the Wet’suwet’en and the Tyendinaga are doing is for us all, and we need to show them that they are not alone! We will bet rallying at the Legislature in order to continue to hold the province accountable for their violent and unconstitutional actions taken against the Wet’suwet’en people and their homelands.”

A police operation that saw officers descend on a rail blockade on Tyendinaga Mohawk Territory in central Ontario and arrest several protesters Monday seemed to stoke tensions even as it paved the way for train service.

Ontario’s provincial police said officers moved in after efforts to negotiate a peaceful resolution with the protesters were exhausted and a midnight deadline to clear the rail blockade, which has brought freight and passenger rail traffic in much of Eastern Canada to a virtual standstill, was ignored.

Politicians hailed the police raid on the blockade near Belleville, Ont., but the use of force angered Indigenous leaders, community members and advocacy groups who had hoped for a peaceful resolution.

“Today’s arrests of First Nations activists at Tyendinaga shows once again that we will never achieve reconciliation through force,” said Perry Bellegarde, chief of the Assembly of First Nations, in a statement. “The Crown is removing people from their lands but is not removing the central barrier to progress – action on long-standing issues of First Nations title and rights.”

The Mohawk people of Tyendinaga also condemned the use of force by police, saying the protesters were “standing up for human rights and the land and water.”

“The rule of law includes human rights and Indigenous rights,” they said.

The raid started at 8:30 a.m. when a column of police vehicles drove up the dirt road toward the blockade. Dozens of police officers then lined up in front of the protesters at the encampment, which has been in place since Feb. 6.

Officers detained a few demonstrators, wrestling one to the ground before taking the group away. The officers held the line near the tracks until about 9:15 a.m. when they moved in again to arrest more men and take control of the area around the tracks.

Police later said 10 people were arrested and are facing multiple charges. They said all 10 have been released with conditions but provided no further details.

The protesters had set up the blockade in support of the hereditary chiefs of the Wet’suwet’en First Nation, who oppose the development of a natural gas pipeline project that crosses their traditional territory in northwestern British Columbia. The Coastal GasLink natural gas pipeline, however, has the support of elected band councils along the pipeline route.

Numerous similar rail and road blockades have sprung up in multiple provinces throughout the month, halting freight and passenger train service for much of the country.

Ontario Provincial Police said it had tried to negotiate peacefully with the protesters.

“We have remained respectful of the ongoing dialogue, including issues of sovereignty between our Indigenous communities and various federal ministers,” spokesman Bill Dickson said. “… Unfortunately, all avenues to successfully negotiate a peaceful resolution have been exhausted.”

A second encampment set up nearby remained in place, Dickson said. Tires were seen burning at that location Monday morning.

By midday, the main encampment remained and some demonstrators banged drums and chanted while workers from rail owner Canadian National Railway Co. arrived on site and started inspecting the tracks.

CN issued a brief statement saying the company was please the “illegal blockade” had come to an end, but offered no indication when service would resume.

Via Rail announced its route between Montreal and Halifax will resume service on Friday.

One of the Wet’suwet’en hereditary chiefs, Na’moks, offered words of encouragement for the Ontario protesters.

“They’re doing the right thing for the right reasons,” said the chief, who also goes by John Ridsdale.

He later said those who visited Mohawk supporters in Ontario have returned to British Columbia, and that while he previously believed the RCMP was removing its mobile detachment from the First Nation’s territory, he now believes it has simply been shut down because there is a new gate blocking a turnoff towards it.

The Wet’suwet’en hereditary chiefs have called for the removal of the RCMP mobile unit, the end of foot patrols and the removal of Coastal GasLink workers from the territory as conditions for meeting with the federal government.

Further support came from the Kahnawake Mohawk Council in Quebec, which issued a statement expressing “outrage and disgust” over the Ontario police actions.

Meanwhile, about 200 protesters marched through downtown Ottawa in support with the Wet’suwet’en hereditary leaders.

And in British Columbia, members of the Gitxsan First Nation erected a new blockade on a rail line outside of New Hazelton.

The blockade was temporarily taken down Feb. 13 pending a meeting between the Wet’suwet’en hereditary chiefs and federal government that has yet to materialize.

Gitxsan Chief Spookwx, who also goes by Norm Stephens, accused the RCMP of “dragging their feet” on demands from the Wet’suwet’en hereditary chiefs.

Protesters also returned to the Port of Vancouver on Monday afternoon.

“But at the same time, the impact of these rail disruptions is untenable. It can’t continue,” he said.

Ontario Indigenous Affairs Minister Greg Rickford praised the provincial force’s handling of the rail disruptions including the Monday morning operation, saying it was clear officers had learned lessons from the violent 1995 clash in Ipperwash Provincial Park that resulted in the death of an Indigenous activist.

“I think any other approach, frankly, would have been unreasonable and disrespected the fact that, in a major conflict a number of years ago, a life was lost,” he said. “Ontario turned the page on that approach today.”

With files from Adrian Wyld and Paola Loriggio, Liam Casey and Allison Jones in Toronto, Sidartha Banerjee in Montreal and Amy Smart in Vancouver, The Canadian Press

Read the injunction below: 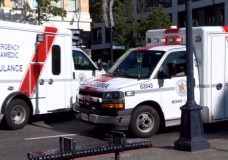 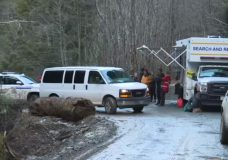