WATCH: Tuesday’s snow caused a lot of havoc in central Vancouver Island. It blanketed from the Malahat north to Fanny Bay and across to the Alberni Valley. Downed branches led to numerous power outages and drivers encountered lots of problems on the roads. Kendall Hanson reports.

Drivers struggled to get up hills or get down them. A truck with a trailer full of furniture skidded onto the sidewalk while trying to navigate Rutherford Road. Another driver lost traction and crashed on the Island Highway near Cobble Hill. A school bus slid into the ditch on Cobble Hill Road. None of the students aboard was injured.

“One car slammed on the brakes and I swerved to avoid him,” said Andrew Hill. “And this car was also trying to stop from hitting a guy who had come off the road ahead so [I] just didn’t have enough traction to stop in time, or any traction really.”

The snowstorm led to power outages from Parksville to Sooke with snow-laden branches breaking and pulling down power lines.

“Plows are trying to catch up,” said Capt. Colin Dyck of Nanaimo Fire Rescue. “It’s a heavy wet snow that’s causing some hydro issues as the one behind us here. This has been the majority of our runs this morning.”

BC Hydro says it brought in all its crews and contractors to help restore power for customers.

“We’ve got about 54,000 customers out right now [on Vancouver Island],” said Ted Olynyk of BC Hydro. “We’re hoping we can bring many, if not all of them, back tonight but it will certainly be a challenge for our crews.”

But the snow brought out the best in people as well. A Mill Bay woman paid it forward after a neighbour surprised her by clearing her driveway.

“Well if he’s doing my driveway, I can come over here and allow everyone to get into their postal box to get their Christmas cards and parcels,” said Nancy Bronstein. 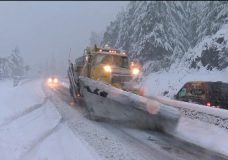 Snow grounds flights in Victoria and more is in the forecast