After years of delays, Sidney is set to have its first cannabis shop.

Town of Sidney councillors voted late last month to refer the municipality’s first cannabis shop to the province’s Liquor and Cannabis Regulation Branch (LCRB), who will determine whether or not a cannabis retail store licence will be issued.

“We’ve been approved to take the next step by council,” said co-owner Brad Styles. “They’re going to refer us to the LCRB and we are going to get our cannabis store in Sidney, the first one.”

But getting to this point has not been easy or quick for business for Styles and his partner and co-owner Cindy Pendergast.

“It’s been a year and a half,” said Cindy Pendergast, other co-owner of the shop. “It’s been a long time. We’ve been paying a lease, we’ve been doing it every month, its been tough to do, but we continued on.”

Back in January, their business plan was stalled after they were caught in a catch 22 situation over differing storefront window rules and provincial window storefront rules.

The province had rules that demanded opaque storefronts for cannabis shops so that passersby could not see in, but Sidney had regulations that directly conflicted these rules, having their own regulations to ensure window fronts are transparent.

RELATED: How a window has prevented Sidney’s first cannabis shop from being approved

That issue was resolved when the province changed its rules, now allowing transparent windows, but then, the city refused to approve the business’s license request to the province.

So the couple took the city to court and won because the city hadn’t conducted a public inquiry before denying the application.

“The judge said, ‘Hey guys, you forgot to get the Town of Sidney’s input from the real people of the town. It turned out 90 per cent voted yes,” said Pendergast.

“Despite my personal apprehension, given the overwhelming public support, and with the understanding that these products will be available in a controlled and highly regulated retail environment, I have supported the application,” Rintoul said in a statement to CHEK News.

The couple attributes their success, to the people of Sidney, like Diane Dixon, who works two doors down. Dixon wrote multiple emails to council supporting the cannabis shop, and spoke at a council meeting, telling the community why the cannabis shop should be able to start up.

“They’re great. They’re positive. They’ve gone through such turmoil in this,” said Dixon. “The product is perfect for so many people, so many ages groups and everything. Most people would have given up, but they always had a smile on their face.”

The shop was previously known as Happy Buddha Cannabis, but after hearing concerns from the community, the couple quickly agreed to change the name.

“Truthfully, we didn’t want to change the name, we loved it,” said Pendergast. “But we aren’t here to bring people down, we want to lift people up, so if it offends anyone, we wanted to listen and change the name.”

Now, as they contemplate a new name, they are ready to move forward.

“Thank you Sidney for all your support, seriously, awesome. Truly touched,” said Styles.

Once they decide on a name, these owners say they’re aiming to open on Nov. 1. 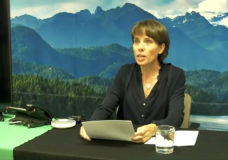