As new developments continue to rise in the Captial Regional District, the amount of dirt coming from these sites is overwhelming rural communities in Sooke, Metchosin and the Cowichan Valley.

“When you’re building something, you have to excavate the foundation. You have to do something with the soil and they’ve run out places in the core area so they’re coming to the rural area,” said Mike Hicks, the regional director of the Juan de Fuca Electoral Area.

Construction companies on Southern Vancouver Island and running out of options for places to dump dirt.

“The big problem is that we have so much development in the Capital Regional District that we don’t have a place to put the material that’s being excavated,” said Rory Kulmala, CEO of the Vancouver Island Construction Association. “We’re struggling with a bit of coordination of where we can dump in which community. We’re sending a lot up over the Malahat.”

Sonia Furstenau, the MLA for the Cowichan Valley, says this issue has been overlooked by the Government of B.C. for years.

Soil has to be tested for contaminants before being dumped, and if done improperly, dumping dirt can have huge environmental impacts.

“That is not just dirt. That is boulders, that is trees, once you dump in an area that’s ecologically sensitive, you’re going to change that area forever,” said Jay Shukin, the president of the Association for the Protection of Rural Metchosin.

Dirt dumping is regulated by the different municipalities, but the weight of the CRD’s soil is falling on some of the smallest communities.

“Almost 75 percent of my staff’s time the first couple of months this year was dealing with soil permits from outside of the area so we’re not getting our work done,” said Hicks.

“We’re working on a solution, we will get there. We don’t want to discourage construction in other areas, we want to help our neighbours but we have to find the balance.”

BC’s Green Party leader says this shouldn’t rest on the shoulders of municipalities, but the province.

“Ensuring that there’s is a framework, a regulatory framework that is clear, that it’s enforceable and that it protects regions’ environmental systems in areas that are accepting this soil,” said Furstenau.

Until the province steps in, these rural communities will continue to cope with more and more dirt. 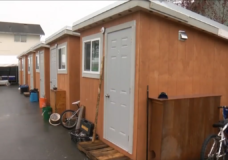