WATCH: While we don’t have groundhogs on Vancouver Island, they are a type of marmot, and we have plenty of those. April Lawrence went to find them.

But on this side of the border, Shubenacadie Sam was ready to take a bite out of winter, and a reporter who tried to keep him from escaping and predicted an early spring.

So what does all this cross-border confusion mean for us here on Vancouver Island?

A search for local marmots starts at the Fairmont Empress in Victoria where Roger the yellow-bellied marmot has lived for 10 years.

“We haven’t seen him yet this year, but we think he’s probably still hibernating it’s a little early, um but you never know you might see him today it’s Groundhog Day it’s his favourite day,” joked Farimont Empress Marketing Manager Jeremy Heryet.

Next stop is Save-on-Foods Memorial Centre, home of beloved Victoria Royals mascot Marty the Marmot who is nowhere to be seen.

“This particular marmot works at night at our games, so he does have a tendency to sleep in so it’s possible that that’s the case, but I think the leading possibility is that there are [Medicine Hat] Tigers in town and marmots and tigers don’t get along,” joked Victoria Royals General Manager Cam Hope.

“There is a small hiccup in that she’s currently hibernating under about 2.5 meters of snow and another meter or more of rock and soil,” said Marmot Recovery Foundation Executive Director Adam Taylor.

“But we have done research and we’ve determined that because she’s hibernating she can’t actually see her shadow and as a result we should have an early spring.” 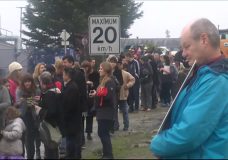 Lines of people turned away from Trudeau's Nanaimo town hall 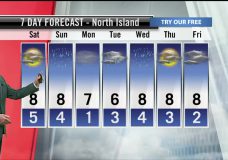