WATCH: A power surge happened in Duncan when BC Hydro restored power twice after a pre-Christmas storm. Dean Stoltz has more.

Suzie Gee is still tallying up the damage done to several of her appliances after a power surge went through the Tall Timbers mobile home park south of Duncan.

“The power surge I guess just blew through the park and took out a massive amount of appliances,” said Gee.

Driving through the park. visitors and residents now see TVs in snow banks outside of homes because they don’t work anymore.

There are also freezers, refrigerators, air conditioners, computers and more items that residents say were “fried.”

“It started, you could smell the burning and a see the light smoke coming out of it.” said neighbour Tricia Furgason.

It all began when a storm knocked out power the week before Christmas. A couple of days later BC Hydro restored their power, but only temporarily.

“Everything went on, we were all happy, they turn around, they leave the park and 20 minutes later the entire thing blew up again. Same thing, Fourth of July right out of the transformer,” said Gee.

It?s when hydro crews came again to turn on the power that the surge went through the park ruining many of the appliances.

“I mean furnaces and, you know the one lady, her son had to grab her TV and threw it outside right away because it was literally on fire,” said Furgason.

“They don’t have a full count of those affected because some residents have been away but about 12 people are scrambling to get replacement refrigerators, ovens and more.

Some of the residents are elderly or low-income, so it’s been a hardship.

“You know some folks were able to cook with their wood stoves,” said Furgason. “Ourselves, we have a little camp stove so we were OK with that but it was the cold, it was so cold.”

Gee is one of the lucky ones. She found a cheap fridge and stove that were delivered Friday.

BC Hydro says residents can make a claim through the BC Hydro website but that compensation is not paid for damage relating to storms. 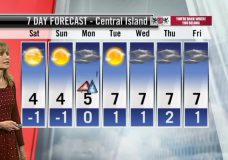 Snow will continue for east Vancouver Island until later this evening 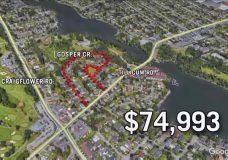 Gorge Waterway in Esquimalt may cost millions of dollars to fix