February 23, 2021 updated
Chek
WatchA dramatic take down by VicPD on Douglas Street was all caught on video. Officers fired less-lethal rounds at a man who had allegedly robbed a pharmacy just minutes before. Why were these non-lethal weapons used, and why do they seem to be coming more and more popular? Rebecca Lawrence finds out.

The police use of less-lethal weapons is on the rise across Canada, according to a report from the RCMP.

A less-lethal ARWEN weapon was used on Saturday by Victoria Police, who were apprehending a man who had allegedly just robbed a nearby pharmacy after telling the staff that he had a gun.

After being shot by the less-lethal rounds, he was apprehended and taken to hospital for non-life-threatening injuries. Officers did not find a gun on the suspect and he is now facing charges of robbery. At least nine officers attended the scene.

Less-lethal weapons, like the ARWEN launcher, are typically aimed at lower extremities to try to disable a person without permanently injuring them.

The reaction on social media to the police response on Saturday is mixed. Many are praising VicPD’s actions and others are questioning if the number of officers and the use of the ARWEN rounds were excessive force.

“Nonsense! Twelve (with multiple weapons each) against one is never necessary to bring that one person under control whether they are wielding a weapon or not,” wrote one person on Facebook regarding the video of the VicPD.

Another person questioned the use of the weapon itself, saying, “[The] cop should not have discharged the firearm, period.”

While there are some negative comments, most are commending the actions taken by the police department.

“It seems to me they handled a potentially life and death situation with the least amount of violence possible. Go team VicPD!” said one Facebook user.

Another commenter stated the criticism isn’t needed, saying, “Just let the cops do their job. This bad guy threatened people, They did what had to be done.”

On the weekend, Const. Cam MacIntyre, media relations officer for the VicPD, said at the time, officers believed “that this man was armed with a firearm, had just committed a serious, violent crime, and was advancing toward officers while reaching toward his waistband.”

Use of Less-lethal weapons rising

According to a report from the RCMP, the use of extended-range impact weapons is growing across the country.

According to Dr. Robert Gordon, a criminology professor at Simon Fraser University, although less-lethal weapons can still kill, they are a safer option than a traditional firearm.

But he also says it’s unusual to see it used in a situation like the one on the weekend in Victoria.

“That is a weapon that’s normally used as a crowd control operations,” said Dr. Gordon. “Not saying it couldn’t justly be used in some other way, it’s just not usual that you’d go to a situation like that with an ARWEN gun. It’s more likely to go with a Taser.”

Travellers struggle to book quarantine hotels in B.C., as phone lines back up 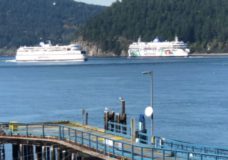