August 26, 2020 updated
Chek
WatchA Qualicum couple is living proof that some people really are made for each other. COVID-19 forced them to postpone their planned wedding, but as Skye Ryan reports, it hasn't stopped them from a surgery that's bonding them for life in another way.

“When we first started dating I was just like whoa where have you been? He treats me so well,” said the Qualicum woman.

And in 2020, they found their perfect match was also a lifesaving one.

“Our relationship happened for a reason and it was meant to be,” said Murray.

The Qualicum couple was planning for a May wedding when in January, she got very sick with major kidney failure. Then in March, the COVID-19 pandemic forced Murray to be quarantined at home, due to her compromised immune system. She was to be quarantined until an organ donor could be found and the 43-year-old could get a critical kidney transplant.

“When Phil heard I was sick, he was like I want to be tested,” said Murray.

“You’ve got a partner that you love. You want her to be healthy and be around, why wouldn’t you want to?” said Henderson.

The odds that they would be a kidney donor match were incredibly unlikely, one in 10,000, yet testing revealed Henderson was a match for Murray.

“I never thought I’d be that lucky,” said Henderson.

“We have a bunch of friends that say ‘you know what we already consider you married.’ You guys are already a perfect match, this just now proves it,” said Murray.

Now they are awaiting their surgery where Henderson will give his fiance one of his kidneys, and both will be off work for months.

The couple’s friends have created a GoFundMe page to raise funds to tide them over, a wedding gift of sorts to a couple who had to postpone their wedding.

“We’re already connected as much as we’re ever going to be,” said Henderson. 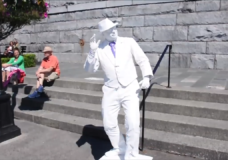 Family and friends remember the man behind 'Plasterman' living statue 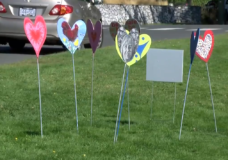