Posted: Dec. 18, 2019 6:43PM | Last Updated: Dec. 18, 2019 7:13PM
CHEK
WatchA new, seismically safe high school is coming to the Cowichan Valley. The BC Government announced this morning it will replace the existing 70-year-old high school in Duncan. When it's done in September 2023, 1.100 students will walk through the doors. Julian Kolsut reports.

A replacement for the aging Cowichan Secondary School in Duncan was announced Wednesday from the school’s gym.

B.C.’s Minister of Education Rob Fleming made the announcement and was met by cheers from students and staff.

Almost $80 million is being provided by the province and $2.2 million from the Cowichan Valley School District for the project.

There will be capacity for 1,100 students, eliminating the need for portables.

“There is a lot of work to upgrade this building which would not be seismically controlled for safety, so it is so important that we have a replacement coming.”

The funding is part of the province’s Seismic Mitigation Program. The school was built in the 1950s and is barely safe for students.

It will be built next to Vancouver Island University’s Campus in the city. It will have a neighbourhood learning centre that will be used for community programming, such as child care, to further benefit people in the Cowichan Valley.

“It’s not in good condition, in fact, the reason it has so many portables here, twelve of them in total, is that some parts of the school are unusable right now.”

Work for the project has been going on for over a decade. Eilís Young will be one of the first students who will call the shiny new school theirs.

“I am going to be in grade 12 in my graduating year when I come to the new school,” said Young.

“I will be able to graduate in that new school, so I’m really excited… I really like the fact that they are making it more environmental.”

Since September 2017, the province has announced over $1.7 billion in school capital investments, including almost $900 million for seismic upgrades and replacements.

The province says this school was in the biggest need for replacement.

The first students will hopefully be able to walk the halls by September 2023, until then students will continue to use the building.

Back in June, the province announced they will be providing $88.6 million for a 500-seat elementary school and a 700-seat middle school in Langford.

The schools will be built on a single, 6.5-hectare site. 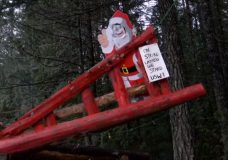 B.C. labour minister to meet with both sides in forestry strike after talks break down 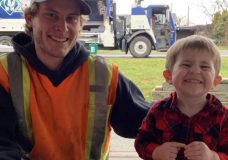