The blockade, which began at 5:30 a.m., was on the northbound lanes of the Patricia Bay Highway (Highway 17) just past the ramp at McDonald Road Park in Sidney, near Tsehum Harbour Park.

The group that led the blockade is called Save Old Growth, which is demanding the B.C. government pass legislation to immediately end all old-growth logging in the province. They have held previous blockades in the past throughout Greater Victoria, Vancouver Island and the Lower Mainland.

At one point during the blockade, a protester had stuck their hand inside a barrel of concrete while lying on the ground while two other protesters chained themselves together through a car, with one protester inside the vehicle and another outside.

Furthermore, a video — now removed — that was uploaded to an Instagram account called @Save.Old.Growth showed a large structure with a protester on top of it falling to the ground. The video has since been removed.

Protesters at the scene alleged that a driver compromised the support structure for the ladder, causing it to collapse. The RCMP confirm they are investigating.

“There will be an investigation conducted to determine whether or not the fall was caused by criminality or not, or what led to that fall,” said Cpl. Alex Bérubé, spokesperson for the BC RCMP.

The blockade led to traffic backups, delays and frustrated motorists trying to get to the ferry and elsewhere. At least 30 cars have been ditched as people scrambled to make it to the ferry terminal on time.

RCMP say five people were arrested and three remain in police custody. They did not say what potential criminal charges the protesters could face.

“The protest created frustration amongst commuters who attempted to bypass this illegal blockade”, stated Bérubé. “Those blockades are simply dangerous for protestors and for others.”

RCMP also acknowledged that one protester fell down from the top of a structure and hurt themselves. They say that person was taken to hospital with non-life-threatening injuries. That protester is one of the five facing charges.

One protester on scene who told CHEK News he was charged with mischief, his fourth arrest in relation to ongoing old growth logging protests, had a message for John Horgan and the NDP government.

“Stop politicizing the extinction of the human race and the collapse of society because that’s where we’re heading if you don’t take the action the scientists have been saying fairly clearly we need to take,” said Deraek Menard.

It’s been well over two hours since protestors blocked parts of pats hwy (n/b to bc ferries). Still here with just over a dozen protestors left.

Traffic still limited to one lane with police navigating. One protestor has his hand stuck inside a barrel of concrete.@CHEK_News pic.twitter.com/sqRJluL2BB

Best place I could find, but police have started to remove some of the protestors on the road.

Seems two people chained themselves through a car (one on the ground, one inside) and are also linked together.

“The earth is in a death spiral. It will take radical action to save us.”
– George Monbiot 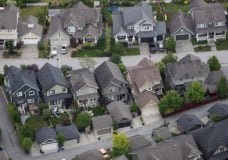 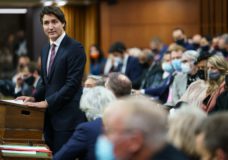