OTTAWA — Prime Minister Justin Trudeau deflected questions Tuesday about why it took more than 12 hours for the Canadian Armed Forces to confirm a military helicopter had crashed and when he found out that horrified crew members on board a Halifax-class frigate had watched it go down.

“The military has very important protocols in place when there is a tragic incident like this around informing the next of kin, talking to the families as quickly as possible before sharing information with the general public,” Trudeau said. “All those protocols were followed.”

The Cyclone helicopter carrying six Armed Forces members crashed into the Ionian Sea off the coast of Greece on April 29. Defence officials have said it was returning to HMCS Fredericton at the end of a NATO training mission.

The remains of Sub-Lt. Abbigail Cowbrough were subsequently recovered while the other five service members on board are missing and presumed dead. (The remains of one other person have been recovered but not yet identified.)

The military initially reported that the helicopter was missing after HMCS Fredericton lost contact with it. It did not confirm a crash until the next day, after the NATO military alliance had already reported the same thing.

Even then, the government and military continued to suggest that the first sign of trouble came when Fredericton lost contact with the Cyclone, suggesting it was operating at a distance from the warship. They also made no mention of service members on the warship having seen it crash.

“Around 6:52 p.m., the ship lost contact with the helicopter crew and a few minutes later flares were seen in the water,” chief of the defence staff Gen. Jonathan Vance said during a briefing to Canadians on April 30 attended by Trudeau and Defence Minister Harjit Sajjan.

Vance reported during the same briefing that the next of kin of all six members had already been notified about the crash.

The military has repeatedly declined to say how close the Cyclone was to Fredericton when it crashed into the sea. Rear-Admiral Craig Baines, the commander of the navy’s maritime command, did estimate on Friday that the crash was “within two miles” of the frigate.

The Department of National Defence stood by its handling of the situation, saying in a statement Tuesday that it provided what information was known and confirmed on April 30 while focusing on the search and rescue of the missing members.

“As the situation evolved, additional information was provided, as appropriate,” the department said.

“Respecting the initial notification of next of kin, the Department of National Defence and the Canadian Armed Forces have been forthcoming with the release of confirmed information while also ensuring that it does not compromise the ongoing flight investigation.”

A flight-investigation team that includes a representative from Sikorsky Aircraft, which builds the Cyclone, is currently investigating the circumstances around the crash. That includes interviewing those aboard Fredericton who saw the crash.

The helicopter’s flight-data and cockpit-voice recorders were recovered and are back in Canada for analysis.

The Defence Department said it has deployed a team that includes social workers and military chaplains to Italy to provide mental health support to the crew, who have been allowed to communicate with loved ones back home.

“We appreciate this tragic accident has deeply affected our personnel on the ship, and we will continue to provide them with the support they need, which can extend to the return of a member back home if the need arises,” the department said.

The Cyclone was deployed with the Halifax-based HMCS Fredericton to Europe in January, where they had been attached to a NATO maritime force tasked with patrolling the Mediterranean and Black seas.

Cyclones are primarily based on naval vessels and used for hunting submarines, surveillance and search and rescue. They entered operational service — replacing the military’s ancient Sea Kings — in 2018 after more than a decade of developmental challenges.

The military is preparing to hold a special ramp ceremony Wednesday at Canadian Forces Base Trenton to repatriate Cowbrough’s remains and honour all six who died in the crash. The family and friends of the service members are expected to be in attendance.

The family of one those, Sub-Lt. Matthew Pyke, remembered the 34-year-old sailor on Tuesday as a patriotic Canadian who died serving others. Pyke was also described in a statement from his family as a true Maritimer who wore his heart on his sleeve.

“He fell in the line of duty for his nation, a finality that deeply aligned with his ethos of honour and helping others before self,” Pyke’s family said in a statement delivered in Halifax by a spokeswoman for the Navy as they continued to grieve his loss.

The ceremony is scheduled to begin at 2:30 p.m. eastern time and can be streamed from the Canadian Armed Forces Facebook page.

Those service members whose remains were not recovered will be represented by military headgear resting on pillows to be carried by fellow military members. Following the ceremony, a procession will proceed down the Highway of Heroes from Trenton to Toronto.

While such processions have traditionally been accompanied by crowds gathering along the highway to show their support and honour those who have died, the Ontario government is encouraging people to watch it from home because of COVID-19.

This report by The Canadian Press was first published on May 5, 2020. 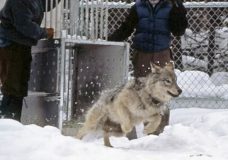