Marg Drysdale, fire information officer with B.C. Wildfire’s Coastal Fire Centre, says the South Island on average today is receiving about 10-15 millimetres of rain and the rest of the Island will receive about 5-10 mm which isn’t enough to lift the current ban on Category 2 and 3 fires.

She also notes that there is rain in the forecast, but it is difficult to determine if it will be enough to alleviate the risk by Halloween.

“Despite the amount of rain that we may be getting on the surface, it’s going to be up to each location to look at how much the rain is going to impact down into the ground if it’s going to make any difference,” Drysdale told CHEK News in a phone interview. “Because if it doesn’t impact the roots or the forest debris on the forest floor, then we’re still in conditions where we may have fires.”

The Coastal Fire Centre’s ban is in place until Oct. 28, and Drysdale says the centre will be keeping an eye on the conditions to see if the ban will be lifted then, or if it will need to be extended.

“The Category 2 and Category 3 prohibition is going to stay in place until the 28th, which is when it was legally put in till,” Drysdale said.

“If required our prevention folks will take a look at it on that date, and see if they’re going to allow it to lapse or if they need to put in a new prohibition in place to extend it. It’s simply at this moment going to depend on how much rain we get, and where it lands.”

Information about which fires are permitted or banned can be found here.

Drysdale notes that the rain has to land in places that will help to alleviate the fire risk in order to have the prohibition lifted, so even if it appears to be raining heavily it may have not landed in the right places, or permeated into the ground enough.

“We do not want people to assume that simply because we are getting rain this weekend that that is lifted, it is not,” Drysdale said. “We really want people to understand at this moment, until that is lifted, people are allowed to have campfires, which are a half a meter by a half meter in size anything larger than that is still considered an illegal open fire.”

Derek Lee, meterologist with Environment and Climate Change Canada, says weather is returning to what a normal fall would look like on the Island, but we’re still well below our average rain levels.

“We’ll make the first kind of return our fall weather pattern, so we’re getting a storm kind of off the Pacific, that’s finally bringing rain back to the Vancouver Island area,” Lee said. “Accumulations don’t look the look to be too high. Today, we’re looking at maybe around two to 10 millimeters all across the Island there. So enough to get the ground more wet and probably measurable, but nothing too drastic to start off with.”

Lee notes that it is good news that the season is starting off with lighter rain, and it should reduce the risk of floods.

“We’re looking at the best scenario possible right now, but obviously, it’s not good because we’re more than halfway through the month and we’re missing a lot precipitation,” Lee said. “But we will be in that after fall pattern and continuing to next week. So that’ll bring more substantial storms that hopefully bring some precipitation amounts in there.”

In October, the Victoria area normally receives 100 mm of rain, but it is only predicted to receive about half the usual amount this year, according to Lee.

Though the Coastal Fire Centre is uncertain whether its fire ban will remain in effect, Drysdale says there is full support for municipalities who choose to ban fireworks or bonfires this Halloween due to the dry conditions.

“We do completely support local municipalities and local governments if they choose to ban fireworks, that it’s up to them,” Drysdale said. “A lot of them are choosing not to have fireworks for Halloween simply because it is still dry.”

On the South Island, Saanich and Central Saanich have implemented Halloween fireworks and bonfire bans, and Sooke has also implemented a ban on fireworks.

Drysdale says if anyone finds an illegal fire during the fire ban, it can be reported to the Report All Poachers and Polluters (RAPP) line at 1-877-952-7277 (RAPP) or #7277 on the TELUS Mobility Network. 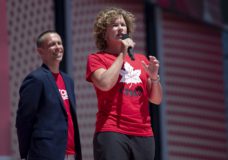 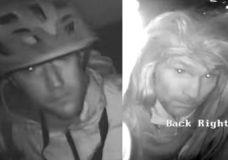