October 4, 2020 updated
CHEK
WatchResidents near a controversial safe injection site in the Cowichan Valley, are finally seeing progress, with more efforts to clean up the street underway.

Tavin Somerset spends time looking for used needles when her son is in school.

“They bury them,” said Somerset, a Cowichan resident and mother of a child in middle school. “I wanna document what the situation is.”

Somerset is one of 850 locals who have banded together, cleaning up and regularly patrolling the area around York Road in North Cowichan, where open drug use is a daily occurrence.

It’s also where Island Health is proposing to open a wellness centre that would serve as a safe injection site and would be steps away from the Warmland Shelter, which offers services to many addicts.

Although Island Health’s planned wellness centre would offer other services including primary care, harm reduction, and case management, it would be located near a handful of schools including Cowichan Secondary, Duncan Christian, Alexander Elementary and Quamichan School.

The Cowichan Aquatic Centre and Cowichan Community Centre, formerly known as the Island Savings Centre, are also nearby.

“Unfortunately this is smack dab in the centre of this youth daily use zone,” said Somerset.

Two weeks ago, a rally of more than 100 residents gathered to voice their feelings of opposition and helplessness about the planned wellness centre.

Since the rally, however, things have changed. Residents have started patrolling the area, in addition to needle cleanups that were already taking place, and the shelter has hired a security guard to discourage addicts from loitering.

Somerset said solutions are needed and that simply protesting about something isn’t always going to work.

“We have to find these solutions. We can’t just demonstrate and say we don’t want it. We actually have to look at it as though it is coming,” she said.

However, some residents living in the neighbourhood say the efforts are just pushing the problem down the road, where CHEK News cameras found a man passed out on the sidewalk as homecare workers, who were visiting a client nearby, checked to see if he was still breathing.

“It never gets any better,” added another neighbour, Donald Mackay. “At night time we come out here at 2:30 in the morning and that’s all it is.”

Residents are pleading for more supports, to help the entire neighbourhood in this opioid crisis. 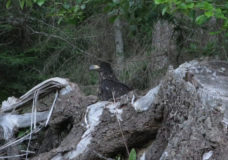 'I was so emotional': Fate of baby eagle on Denman Island grips the community 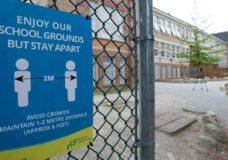