WATCH: Victoria 4/20 organizers say this year’s event will be both a celebration and a protest. April Lawrence looks at why.

For the past 21 years, hundreds would gather in Victoria’s Centennial Square every April 20 to call for cannabis to legalized. But this year the 4/20 will have a different look.

“Being that this is the first legal 4/20 and it’s at the Parliament grounds I think there will be a lot of people come out to their first 4/20 ever because of this,” said organizer Ted Smith.

While it will be a celebration, organizers insist it is also still a protest over the way they’ve rolled out legalization, including rules about where you can smoke, who’s allowed to supply it and restrictions on edibles.

Nikki Jackson has been using cannabis edibles to treat Crohn’s disease and severe back pain for 10 years. She says the government’s plan for legalizing edibles doesn’t consider the needs of medicinal patients.

“They’re wanting to allow 10-milligrams per package and on my pain days I usually eat 400 to 1000-milligrams,” said Jackson.

“Yes recreational legalization is great but they’ve also completely forgot about the medicinal market at the same time.”

The B.C. Legislature has given the green light to the event which it calls “very well organized”. They do not allow any cannabis sales on the grounds and they have a no smoking policy, however they admit the smoking rule won’t be enforced.

There was a similar celebration on the legislature lawn the day cannabis was legalized. And while the 4/20 event will be much bigger, with about 2,000 people expected, organizers say it will be nothing like Vancouver’s.

That “festival-style” event at Sunset Beach was denied a permit by the Vancouver Park Board but it’s going ahead anyway with a concert and about 100,000 people expected.

Organizers of the Victoria event say they’ll leave no trace behind.

“We not only plan on cleaning up at the legislative grounds but we’re going to then go to city hall and if anyone just showed up at city hall then we’re going to clean up after them too,” said Smith. 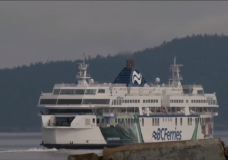 Booze to roll out on some BC Ferries sailings this summer