Jasmin Boisvert, a water services specialist with the Department of Environment and Local Government, says officials will be testing a new flow forecast model that the province has been developing with the National Research Council and the University of Waterloo.

He says they’ve also upgraded their flood early warning system and are sharing the information with partners like NB Power to help better manage operation of dams on the rivers.

Greg Carroll, an operations superintendent with NB Power, says they’re even putting GPS devices in barrels on the ice to help alert when the ice starts moving.

The annual River Watch gets underway next week and Greg MacCallum, director of the New Brunswick Emergency Measures Organization, says the potential for flooding will be determined by the amount of rain and ice jams that occur.

Officials say the amount of snow on the ground in northern New Brunswick is about normal, but has twice the water content as last year. 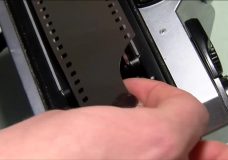 SoundCHEK: Does anyone shoot film anymore?