Can’t get it out of my head.

Love it or hate it, the children’s song Baby Shark is playing on repeat, night after night, outside the NYLA Fresh Thread clothing store in downtown Nanaimo to deter loiterers, according to owner Leon Drzewiecki.

“The problem we’re having here is a safety thing,” Drzewiecki told CHEK News, saying staff often arrive in the morning to find drug paraphernalia discarded outside the store and feces smeared on the windows.

“About a week ago, I started playing Baby Shark,” he said Saturday. “It’s just a fun and positive way to bring some light to this dark situation.”

The song, known for its repetitive “doo-doo, doo-doo” lyrics, gained popularity in 2016, surpassing 12 billion views on YouTube to become the most-watched video on that platform.

For some, likely a younger demographic, it’s become an anthem, but for Drzewiecki, “it’s okay to listen to once or twice, but not all night long,” he said in an interview.

The business owner, who opened his Commercial Street menswear shop in 2014, hopes problem loiterers gathering under the front alcove will hear the song, get annoyed and disperse.

It’s cheaper than installing metal gates or covers, which Drzewiecki says would make the storefront “look like a jail cell.”

Instead, he plays “regular music,” alternative and soft-rock hits, through the outdoor speakers during business hours before looping Baby Shark on a lower decibel from around 6 p.m. onwards.

It’s a tactic that comes as incidents, including theft and property damage, escalate but, as Drzewiecki explains, could be even worse.

“Fires have been lit in the alcove, and it’s a wood-frame building, so a fire would be devastating,” he said.

“In the last six months, I’ve had my windows broken three times and merchandise stolen. I can’t afford to make any insurance claims anymore because my claims go up every time.”

It’s a similar situation for the owner of nearby Red Shelf Decor, who told CHEK News that thieves looted his Nanaimo antique store earlier this month after it was broken into not once, but twice in one night.

The incidents were getting worse for a while, with Drzewiecki noting it was “a bit of a struggle” to operate as usual, especially around Christmas time.

“We had a warming centre move a few doors up the street about five weeks ago, and that has kind of drawn and migrated people to the area,” he said.

“It’s exacerbated the situation and created more of an issue with the garbage being left behind, damage and the vandalism. It’s gone up dramatically.”

Only now, Drzewiecki says his Baby Shark idea has been a hit.

“It’s only been a week, but it’s been very successful,” he said. “We haven’t had to clean up anything. We’re not having any issues or people staying overnight.”

Yet Drzewiecki reiterates it’s a “fun, light, low-cost” way to keep people away, saying he’s heard positive feedback from the community, including other local business operators.

“All the neighbours have responded to it wonderfully,” he said. “This isn’t an attack against the homeless. It’s a safety thing for my staff and my business. For me, this is my income, and I’m trying to maintain a positive look for our downtown.”

Drzewiecki’s also thanking RCMP, Community Safety Officers and Bylaw for cleaning up and helping out.

“They’re wonderful,” he added. “As a community, we have to come together to help, in all aspects, and make sure you’re doing it positively and not harming along the way.” 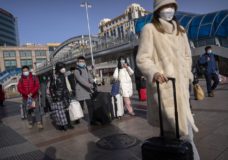 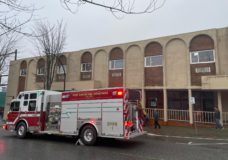