Posted: Jul. 14, 2020 6:34PM
CHEK
WatchNanaimo RCMP are searching for two people who were seen outside the historic Bastion when a bystander raced to extinguish a fire there Monday.

Elizabeth McCormick looked out on Nanaimo’s historic Bastion Tuesday, saying she was grateful the wooden building was saved from an intentionally-set fire on its doorstep Monday.

“It would have been devastating,” said Elizabeth McCormick, owner of Elizabeth’s Lingerie Drawer.

The downtown business owner said had it spread, Nanaimo would have lost a major part of its history.

“Oh terrible loss and you can’t replace it,” said McCormick.

According to investigators, the fire started in the lower stairwell of The Bastion, where debris, charred wood and some smoke damage lingered Tuesday. RCMP are now looking for two people seen right next to the fire when witnesses spotted the flames just before 12:30 Monday afternoon.

“We can’t say for certain if they were the people who lit the fire,” said Sgt. Jon Stuart of Nanaimo RCMP.

“But there was obviously people there at the time. So if you have dashcam footage or you have surveillance in your store nearby that you may have captured something,” he said.

The three-storey landmark that looks out over Nanaimo’s waterfront, was saved by a quick-thinking Good Samaritan who spotted the flames and started dousing them.

At the same time, Nanaimo firefighters raced to save the iconic building that’s towered over the city since 1853.

“Yeah and then we heard sirens and we thought it was a car accident,” said Nanaimo resident Dustin Ross.

“It’s just upsetting because a historical figure like this. It means a lot.”

According to RCMP, the fire could have been far worse, considering the fire was started near where gunpowder for The Bastion’s cannon firings is stored.  The gunpowder was quickly removed by firefighters.

“The building itself is so full of historic artifacts and memorabilia,” said Stuart.

“That it would have been a tragic loss if anything would have happened to that.

Investigators said it’s unclear if the fire was maliciously set, or accidental.

Either way, the fire is now being treated as an arson.  Anyone with information is asked to contact the Nanaimo RCMP non-emergency line at 250-754-2345. 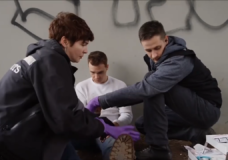 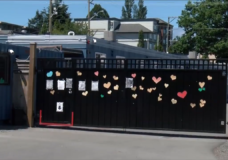