The Nanaimo-Ladysmith MP has submitted a private member’s motion to tackle housing unaffordability.

Paul Manly says it’s a national crisis that needs government action on multiple fronts including money laundering, and a national strategy on rent and vacancy control.

He’s called for an emergency debate in the House of Commons.

“An estimated 1.8 million Canadian households spend more than the affordability threshold of 30 per cent of their income on rent and 800,000 people spent more than 50 per cent. Hundreds of thousands are on the verge of becoming homeless,” Manly said in his address to Parliament.

Manly says the government should remove tax exemptions on Real Estate Income Trusts or REIT’s, which own an increasing number of properties on Vancouver Island.

“We need to put taxes on real estate investment trusts which pay a very low tax rate, a nominal 0.2 per cent instead of a regular corporate rate which would be 12 or 15 per cent.”

Manly believes the move will level the playing field and would help address the housing crisis.

But a real estate investing advocacy group says people who own REIT’s pay taxes on the income from them and government needs to incentivize, not get in the way of, real estate development.

“Alberta has no supply shortage and Alberta has no rent control legislation. Coincidence? I don’t think so. Most economists in the world will tell you if you regulate against allowing a reasonable return on income capital goes somewhere else,” said Michael Brooks, CEO of REALPac.

Meagan Strom is among those in a precarious housing situation. Her landlord sold the home she rents last week, meaning she will soon need a new rental for herself and four boys.

“Right now I’m looking for a place,” she said.

Strom says she is worried she may have to pay more than double her current rent, which will put a strain on their family budget.

“There’s not a lot out there. What is out there is very expensive for a large family,” said Strom, who has been trying to save for a home, but doesn’t have the 20 per cent required for a downpayment on a home.

Strom says she’s not sure what’s the best solution going forward, but remains worried she won’t find an affordable place for her family. 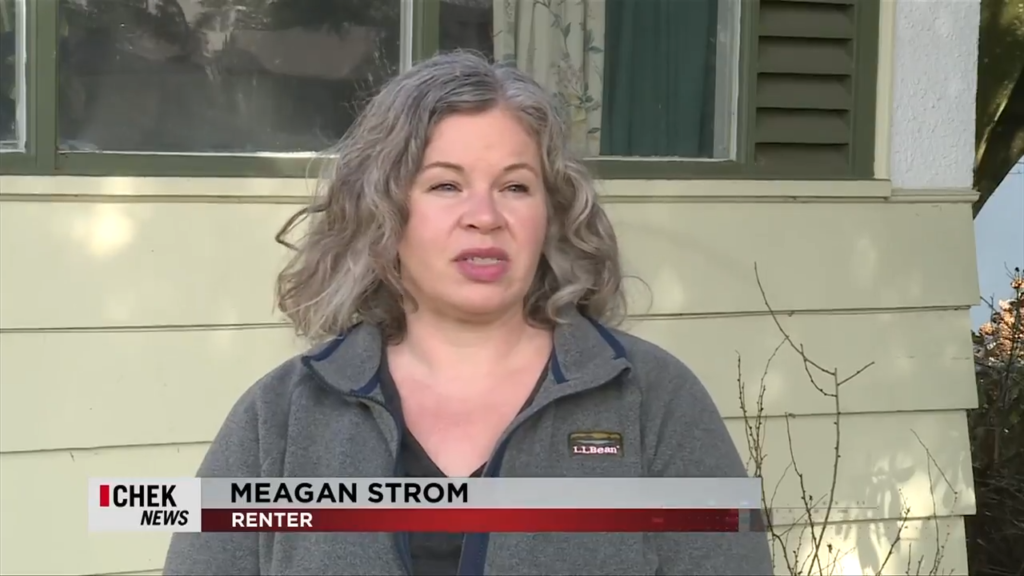 Meagan Strom is worried she will have to more than double her current rent after her landlord sold the home she was living in. (CHEK News)

Travellers struggle to book quarantine hotels in B.C., as phone lines back up