October 31, 2019 updated
Chek
WatchThe owners of a historic Victoria home have discovered a mummified cat buried beneath a house built in 1862.

Warning: This story contains images that may be upsetting to some viewers. Viewer discretion is advised.

For nearly 150 years it lay buried beneath one of the oldest homes in Victoria. Today, a mummified cat sits in a wooden box on the second floor of Wentworth Villa.

If you live in Victoria then chances are you’ve passed Wentworth Villa on Fort Street several times.

The historic home was purchased in 2012 by Stefan and Magda Opalski. Shortly after the purchase, the couple began restoring the home’s foundation and that’s when they came across the shocking discovery.

“We found it under the floor exactly right here,” explained Stefan showing the floorboards in a back room of the house where the cat was found.

Making the discovery even more disturbing, the owners say the cat was lying next to several bones from other animals.

“It was strange that the cat was so well preserved while other animals decomposed,” said Magda.

After doing some research Magda says she discovered mummified cats were common in the 17th and 18th century, especially in Scotland, as a way to keep away witches.

Since finding the dead feline the couple has done their best to keep it preserved in a temperature-controlled setting inside a box. Recently, ahead of Halloween, the couple decided to display the cat in the upstairs of the home along with some historic tombstones collected on the property.

The Opalskis hope to come up with a long-term plan for where to keep the cat.

“We would like at some point to have it presented to the public, who can stand the view, and wouldn’t collapse,” joked Magda.

The couple is contemplating purchasing a proper display case, which could house the cat as part of a piece on the home’s history. 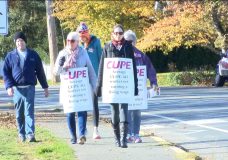 How long could the Saanich school strike last?