‘I feel such an emptiness without them:’ Mother of murdered Oak Bay sisters gives victim impact statement

Warning: This story contains details that some readers may find disturbing.

The mother of the two daughters murdered by their father in Oak Bay read her victim impact statement in court Tuesday.

A grief-stricken Sarah Cotton told court, between sobs, that the brutal murder of her daughters is a “nightmare I can never wake up from.”

Cotton says she was re-traumatized by the trial and she had to brace each day for all the new information and horrible details that would come out.

She says “the blame and guilt I feel for not doing more to try and save their lives is overwhelming.” She says she goes through the brutality of their deaths over and over in her mind. She says her aunt, who has cerebral palsy and was doing well in a group home, became bed ridden and catatonic after Chloe and Aubrey’s murders.

Cotton also told the court, “I am no longer the mother who takes her children to school every day. I now feel a deep void and emptiness that will never go away. I feel such an emptiness without them.”

Cotton says every time she turns around she’s reminded of her girls and “having to face each holiday without them is devastating.”

She told the court: “I fear for my safety if I have contact with Andrew. I dread the endless rounds of parole hearings.”

Cotton talked about the physical, emotional and financial toll of the murders. She had to be put on anti-depressants, anti-anxiety medication and sleeping pills. She hasn’t been able to work on a regular basis, dipping into her line of credit to pay bills.

Cotton says “I will never have that feeling knowing my daughters are safe in their beds.”

Cotton contacted police after Andrew Berry failed to return both their daughters at noon on Christmas Day in 2018 to her, as required by a court order.

Officers found four-year-old Aubrey Berry and six-year-old Chloe Berry dead in his apartment from stab wounds. Berry was found naked in the bathtub with stab wounds to his neck and throat. He told first responders “Kill me” and “Leave me alone” when they arrived.

He was found guilty in September of two counts of second-degree murder.

Second-degree murder carries an automatic life sentence, but parole eligibility ranges from 10 to 25 years. The judge will decide whether the sentences will be served consecutively or concurrently.

On Monday the sentencing hearing for Berry began. His lawyer told the court that Berry still maintains he did not kill the children.

Crown counsel Clare Jennings said the jury believed he fabricated his testimony, that he was attacked by an unknown man who then murdered the girls.

The judge said it’s been proven beyond a reasonable doubt Berry killed the girls,in part to hurt their mother, Sarah Cotton, who he had a lot of animosity towards.

The Crown is asking for no parole eligibility for 21 to 24 years.

Crown Patrick Weir made a sentence submission Tuesday, saying “they were absolutely defenseless” and pointing to case law where a parent murdering their child is the most egregious breach of trust.

Weird says an aggravating factor is the extreme viciousness of the murders that saw both girls’ spinal cords severed from the stabbing. Weir says Berry would have had to turn them both over at least two times to continue the attack. used the children as pawns and that “these acts can only be seen as selfish and defying comprehension.”

He also says the “gravity of the crime really cannot be overstated…. they were stabbed multiple times in their own beds, in their own home, on Christmas.”

Weir says Berry used the children as pawns and that "these acts can only be seen as selfish and defying comprehension."@CHEK_News
#yyj #berrytrial #bcnews #crime

Weir says of Berry: "Given his capacity for extreme violence and his lack of remorse, he presents a very clear danger to the public. If one does not admit responsibility, rehabilitation is impossible."@CHEK_News
#yyj #berrytrial #bcnews #crime

Weir is pointing out other examples where it would be at least 30 years before someone would be eligible for parole.
A weighted average of jury recommendations is 25 years in this case.@CHEK_News
#yyj #berrytrial #bcnews #crime

Weir says: "Both the nature and circumstances of murder point to a very high period without parole" and lists many aggravating factors: age of victims, victims are his children, viciousness of murders, that it happened in their beds, and at least one of the murder not impulsive.

Defence lawyer Kevin McCullough is beginning his sentencing submissions. He once again told court Andrew Berry says he didn't do it. "He has deep sympathy for the victims but is not the killer."

The defence is asking for 15 to 20 years before Berry is eligible for parole, saying it’s the common range for similar crimes. The defence isn’t making any arguments on whether it should be concurrent or consecutive sentences.

Andrew Berry’s sister is the second person to give a victim impact statement on Tuesday. Her name is protected by a publication ban. Sobbing, she says: “When the girls died my whole world and identity cane crashing down around me.”

Berry’s sister says: “I suppose my brother’s mind is stuck re-writing history for self-preservation. My brother, as I knew him, is gone.”

Chloe and Aubrey’s nanny, who looked after them for three-and-a-half years, was sobbing as she tells court she’s had to be hospitalized twice. “How does someone live with this much pain? It’s unbearable.”

Through tears, Chloe and Aubrey’s nanny Suzanne Morin told court: “It’s pain hitting you so hard you double over and can’t breathe. It’s like you’re drowning.”

Chloe’s godfather said: “If an adult can’t make sense of it how can a young child be expected to?”

Victim impact statements also include first responders impacted. A paramedic says: “Little girls don’t die horrible deaths from scores of stab wounds. I went back to work after and thought I could power through but I was wrong. I couldn’t sleep alone or without lights on.”

Chloe and Aubrey’s grandmother, Brenda Berry, says: “I was shocked, numbed. What happened was cruel, uncalled for. My purpose and drive has been lost.”

Chloe and Aubrey’s grandfather Malcolm Berry says: “The brutal, savage nature of the killings is incomprehensible. I am left with a complete void. Christmas will forever be a traumatic day. Nothing will change that.”

Emma Cotton, in a victim impact statement on behalf of family in England, writes: “The murders of Chloe and Aubrey have traumatized and devastated us…leading to stress, anxiety. We have never experienced such anguish and hopefully never will again. The slayings haunt us all.”

Everyone’s said Christmas will never be the same. It’s forever a reminder of Chloe and Aubrey’s brutal murders and a time of sadness. A family friend says her young child told her: “Maybe if I’m good Santa will bring Chloe and Aubrey back.”

The impact statement from St. Christoper’s Montessori says “We’re choked with a barrage of questions and no satisfying answers. How do we tell the children? Do we say Aubrey’s gone? Dead? Will that scare the children? When a child’s violently taken there’s no picture book to turn to give us the right words.”

Tearing up, the principal of St. Christoper’s says: “How do you explain that the person a child trusts the most hurts them? What red flags didn’t I see? I failed them. I failed Sarah, I failed Aubrey, I failed Chloe.”

“When the trial started all of our precious memories were replaced with graphic details. Smiling on the swing was replaced with stab wounds and a fractured skull.”

Ending his victim impact statement with hope, principal of St. Christoper’s says: “Aubrey and Chloe were, and will always remain, our two sweet butterflies.”

Stuart Hall from Christchurch Cathedral School, where Chloe went, says: “I witnessed first-hand the devastation their murders had on our staff, students and families.” Aubrey was supposed to start school there in September.

Hall says they gathered 17 counsellors and grief counsellors to help the students and staff deal with such a brutal and senseless loss. “I watched as bewildered children arrived at their classrooms. A teddy bear was seated at Chloe’s desk that day, a heartbreaking substitute.”

Hall says many staff had to take time off and children in Chloe’s class were greatly affected, as well as their grade 4 reading buddies, but everyone was impacted.

Hall says some students, whose parents were divorced or separated, refused to go home with their fathers out of fear. Others pulled their children from the school because it was too hard.

Oak Bay mayor Kevin Murdoch told court about the huge impact the murders have had in the quiet seaside community: “The murders of Chloe and Aubrey Berry shook the community to its core. This was such an incomprehensibly cruel act to two innocent victims.”

Tearing up, Murdoch talks about shared grief in Oak Bay and how the community felt the need to come together. “Mr. Berry’s impacted, hundreds, even thousands in our community. Given the crime, the community would never feel safe with Mr. Berry on the streets.”

At the end of the second day of sentencing, Berry told court he didn’t have anything to say. Court was adjourned until 10 a.m. Thursday when Justice Miriam Gropper will hand down the sentence. 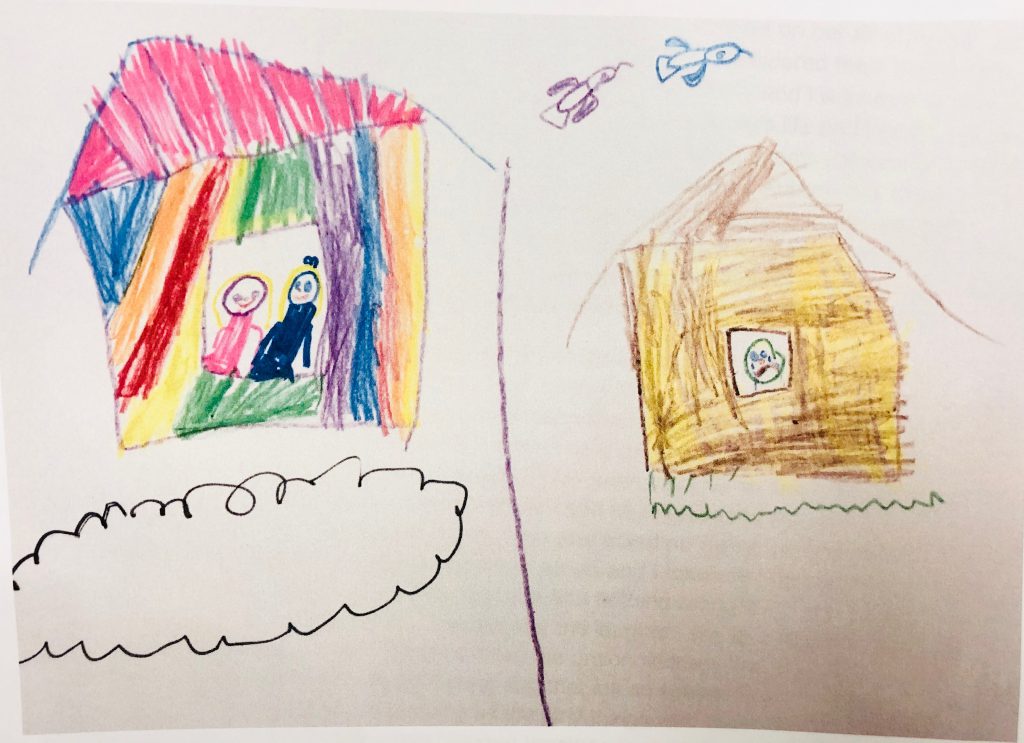 A drawing that is the victim impact statement from one of Chloe and Aubrey’s friends. The five-year-old friend said the drawing shows how their deaths impacted him. 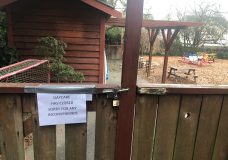 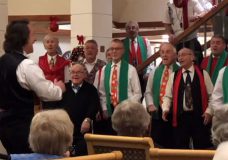