More delays, cancellations after frustrating weekend for BC Ferries passengers

Posted: Jan. 13, 2020 6:18PM
CHEK
WatchAfter three days of cancellations due to wind, there were further delays and cancellations on BC Ferries major routes Monday after a serious vehicle crash near the Tsawwassen terminal. April Lawrence reports

It was an almost peaceful-looking scene as snow fell at Swartz Bay Monday morning, but many drivers weren’t feeling very calm after a weekend of cancellations.

And despite extra sailings, it would turn out their frustrating journey wasn’t over yet.

A head-on crash on the Tsawwassen Causeway in the morning sent one person to hospital with serious injuries. The road was closed, causing major ferry delays and even a few cancellations because staff couldn’t make it to work.

It was strong winds that caused the cancellations over the weekend—they started Friday and kept blowing right through to Sunday night.

One hundred and sixty-three sailings were cancelled in total, most of them on Sunday.

“It is unusual to have the situations where you have three storms in a row,” said BC Ferries spokesperson Deborah Marshall. “We know people have been impacted over the past few days but we do cancel for safety reasons,” she said.

BC Ferries said the decision to cancel is about more than just wind speed.

“It’s also the direction of the wind, the sea state as well as the wave height out there and then which vessel you’re operating,” Marshall said.

BC Ferries cancels 425 sailings a year on average due to weather, but in the fiscal 2019 year, there were 604 cancellations. The worst year was 2012 with 905 sailings cancelled due to weather.

While it was no doubt a frustrating four days, most ferry travelers were putting it all in perspective.

“I can’t really be mad that they want to keep me safe, it could be worse,” said one passenger on their way to Vancouver.

Ferry travel had returned to normal by Monday evening. 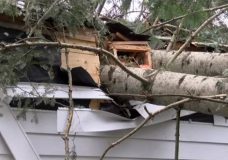 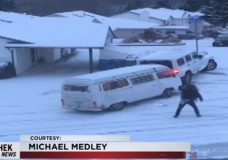 Icy roads lead to many morning crashes in Nanaimo