Missing shopping carts here and there may seem like no big deal but in Nanaimo it’s become a major problem, leading to substantial losses that could push grocery prices even higher.

A Nanaimo city councillor says she’s heard of a downtown grocery store that’s had hundreds of shopping carts go missing in just the past year.

“Yes it is a six-figure loss then obviously they have to recoup some of that so where does it go? It goes back to the consumer,” said Sheryl Armstrong, a Nanaimo City Councillor.

Over At Superette Foods they have also had dozens of their rolling baskets stolen.

“It doesn’t sound like a whole lot but for a small business that is barely holding on it it is a lot,” said Shari Sorensen, Superette Foods Manager.

Sorensen says they’ve reported the thefts in the past but often, there’s little police can do.

Armstrong says she’s wondering if there should be some level of enforcement — but knows that would require more provincial funding.

“There are not enough crown counsels to deal with the serious criminal offences in the province but when you look at the continual build-up of all this I think you have to look at it. Where do we draw the line? If somebody was to take your bike worth $200 they would be charged so are there other options we could look at such as restorative justice?” said Armstrong.

At Risebridge, an organization that helps vulnerable people among others says they’ve started a program that helps drop the need for shopping carts.

Risebridge started storing personal belongings for 16 of those living on the street during the past couple of months.

“Those people are able to access their things every single day and ensure they don’t have to pack their belongings with them and their belongings are kept safe. We’ve seen it be very beneficial and successful,” said
Risebrige would like to see similar programs expanded.

Armstrong wonders if another alternative could limit the missing shopping carts for grocery stores.

“Is it something the province could look at doing to buy securable lockable carts and that might give them the option and that might keep the carts back here?” asked Armstrong.

Armstrong says the status quo is no longer acceptable and she’s looking for solutions.

In 2018 a video went viral after he was recorded flying down a steep hill in Campbell River on a shopping cart. 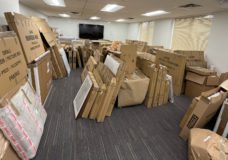 Over $10 million worth of art seized from Oak Bay art dealer: police 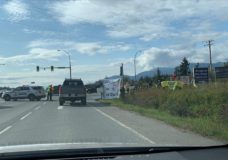