January 1, 2021 updated
Eric Dahli
The mast of a derelict boat came in contact with the deck windows of a waterfront home after washing ashore in Cadboro Bay this week.

The mast of a derelict boat came in contact with the deck windows of a waterfront home after washing ashore in Cadboro Bay this week.

According to Eric Dahli – a co-founder of the Cadboro Bay Dead Boat Society – he received a call on Wednesday, Dec. 30, in regards to a sailboat that had washed ashore in Cadboro Bay.

Dahli says that, following some strong winds, the unmanned boat washed ashore, high enough for the mast to come in contact with the windows of one resident’s waterfront household.

“The winds drove it up on the beach so far that the mast tilted over and was pressing up against the deck glass in front of the house,” Dahli told CHEK News.

After fire crews investigated the boat and ensured there was nothing on the vessel that was flammable or would cause immediate danger, a third party company was called by the owner in order to remove the ship from the beach.

Divers were able to pull the boat away from the beach and eliminate the risk of it causing any damage.

“Had it stayed on, with the pounding of the waves…it could have ended up being a pile of junk in very short order,” said Dahli. “The boat is now back out in the bay.”

Dahli says that the Cadboro Bay Dead Boat Society tried to find the owner, however, there was nothing on the ship that indicated who was responsible for the property.

“We don’t think it’s fair that the property owner should be paying for someone else’s lack of attention,” said Dahli.

At this point in time, it hasn’t been determined whether the vessel was anchored or attached to a buoy.

Derelict boats have been an ongoing problem in Cadboro Bay and just recently, the federal government funded a cleanup where 10 unclaimed boats were removed from the area.

One of Dahli’s biggest concerns is children playing on the boats that wash ashore.

“There’s always all kind of things on these boats that you should not play with,” claimed Dahli.

According to Dahli, boat owners anchor in Cadboro Bay without realizing the risks that come with the strong winds. 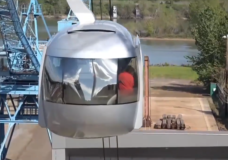