Posted: Aug. 26, 2020 6:14PM
CHEK
WatchMounties raced to the aid of a fellow officer in Nanaimo Wednesday after a suspect allegedly tried to run him down during a traffic stop. As Skye Ryan reports, the police pursuit and takedown that followed captured many residents' attention.

RCMP officers arrested a man Wednesday morning after he allegedly tried down to run down an officer.

Nearly a dozen cruisers raced from all corners of Nanaimo to help with the arrest, which took place at 9:45 a.m.

“I just heard all the sirens and came out here,” said Nanaimo resident Chris Hamilton who witnessed the arrest from his front step.

The arrest was done along the fence line of a children’s daycare at Boxwood Road and Northfield Road, which closed this week for its summer break.

According to RCMP, a Mountie attempted to stop a suspicious-looking vehicle in south Nanaimo.

When the truck wouldn’t stop, the officer blocked the vehicle and the suspect allegedly threw his truck into reverse, crashing into the RCMP’s cruiser, and fleeing.

With the help of calls from the public pointing the way, the suspect was tracked to a gas bar off the Nanaimo Parkway, before he fled on foot, and was taken into custody.

Hamilton said he has just moved into the area as he described the arrest.

“This is literally my first day in this neighbourhood,” said Hamilton.

“I literally just moved here yesterday. So I’m wondering what kind of neighbourhood I just moved into,” he said.

According to RCMP, the suspect resisted arrest and caused minor injuries to several officers.

There is no word yet on what charges he is facing. 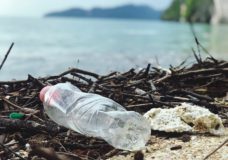 David Suzuki: We are living in a plastic world 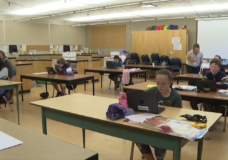 Back to school: What does a return to the classroom look like for Island students?