February 20, 2021 updated
Chek
WatchVictoria Police say they arrested a man on Saturday morning after he allegedly stole an undisclosed amount of cash from a pharmacy on Nanaimo Street.

A man was arrested after allegedly robbing a pharmacy in Victoria on Saturday morning.

According to the Victoria Police Department, a man entered a pharmacy in the 3000-block of Nanaimo Street at around 11 a.m. and told workers he was carrying a firearm and demanded cash.

The man then took an undisclosed amount of cash from the store and fled the scene.

However, he was quickly spotted by officers on Douglas Street, near the Audi Victoria dealership.

VicPD says officers shot the suspect with an ARWEN (Anti Riot Weapon ENfield) non-lethal round after he refused to comply with their orders, advanced towards them, and put his hands inside his waistband.

Witnesses at nearby businesses say they heard loud bangs and some took cover under desks.

The man was arrested and taken to hospital with non-life-threatening injuries, where he was treated and later released. He was then taken into custody, where he remains.

The department says officers did not find a firearm on the man at the time of his arrest. 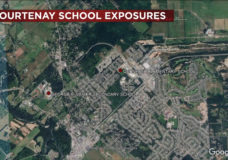