Posted: Dec. 24, 2019 5:46PM
CHEK
WatchThe charitable organization has raised over $100,000 and has delivered Christmas Hampers to people from Sooke to Port Hardy to Powell River who are hurting because of the forestry strike.

3000 members of the United Steelworkers union have been off the job since July 1st in a strike against Western Forest Products. The ripple effect has hit as many as three to four times as many people.

“There’s stress you know? All the people are feeling it, anybody who is connected to the industry right now is hurting,” said Bill Nelson, Vice-President of the Truck Loggers Association. “At the end of the day Christmas will come and go and the strike will not be over and things won’t be all better when it’s done so the parties need to get back to the table and get this finished and get it cleaned up and done for the betterment of these communities and the people.”

On Sunday Loonies for Loggers made its final drop-off of Christmas hampers in Port McNeill. About 350 hampers have been given to struggling families from Sooke to Port Hardy to Powell River in the last few weeks.

“I think we’re all just at the point where we’re all overwhelmed by the support and the fact no one’s going to take Christmas away from these kids is pretty heartwarming,” said Loonies for Loggers co-founder Tamara Meggitt.

The grassroots charitable organization has raised over $100,000 to help anyone struggling in the forest industry on Vancouver Island due to the strike.

“I’m affected in a big way along with many other people in this area. We’re all hurting and this support is absolutely fantastic,” he said.

“We all just hope this comes to an end soon because so many people are hurting, losing everything, losing houses, losing vehicles,” said Ron Tucker, owner of Nimpkish Logging. 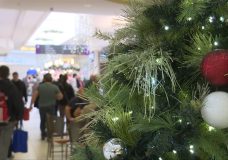 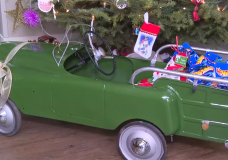