A pair of leaked reports from the BC Centre for Disease Control shows the government has been holding back on the level of detail it provides when it comes to COVID-19 case counts and vaccinations at the neighbourhood level.

The reports were published by The Vancouver Sun on Thursday and are four times longer than the weekly reports published by the BCCDC. They include details like case counts by neighbourhood, and which regions have the highest test positivity rates.

For example, one map shown in the documents suggested test positive rates on southern Vancouver Island for the week of April 18-24 were lowest in North Saanich (0.0 per cent), and highest in the Langford area (10.1 to 20 per cent).

During the week of April 23-29, the reports also show that cases in View Royal, Langford and Colwood were on the rise, with the positive rate increasing to 40 people per 100,000 in those communities.

The level of detail is what experts have been pleading for, but so far, have not received.

“When the public has good information they can make good decisions. And we’re asking a lot of trust of the public and our public health response,” said Caroline Colijn, part of the UBC COVID-19 Modelling Group.

Colijn says that the detail provided in the BCCDC reports should be made public regularly because the information may sway British Columbians to change their habits, get vaccinated or urge otheres to get vaccinated.

“There’s a case to be made for this regional data, in the sense that you know imagine cases are high in your neighborhood if you’re a community leader, a faith leader, a GP, a nurse, someone in a position of connecting with the public,” she said.

“We could imagine that those individuals might see low vaccination rates and encourage their communities to get vaccinated or encourage them not to have gatherings or if cases are high of positivity is high.”

In response to the leaked reports, B.C. health officials called a last-minute news conference at 2:30 p.m. in order to answer questions from the media.

Henry was joined by Dr. Réka Gustafson from the BC CDC and the duo suggested that the leaked data was essentially a draft of information before being released to the public.

“Those are working copies and the vast majority of what’s in those reports are released, in some form, on a weekly basis,” Dr. Henry told media on Friday.

The health officials suggested that what was released is a “working copy” of data that eventually is released to the public and there is a team of physicians that try to put this data into context for the public to digest and understand.

Dr. Henry added that there is a back-and-forth process that takes place in order for health officials to validate data as well prior to its release.

“The people who provided the data need to have a look at it and need to ensure that it reflects the meaning,” Dr. Henry said.

Dr. Gustafson pointed out that it was “helpful” for officials to hear that the public found the format of the leaked reports an effective way to view information and she said the BCCDC will work with colleagues in order to adapt possible changes moving forward.

According to health officials, they are also planning on starting to regularly release reports that are a combination of neighbourhood cases and immunization rates in that same area. Henry told the media that the public can anticipate seeing these reports in the coming weeks.

In the wake of the leaked reports, the BC Liberals — like many members of the media — also raised the question as to why this data hasn’t been openly shared with British Columbians.

“We have been calling for better COVID-19 data transparency for months, but the NDP largely ignored our requests — now we know that they have had this data all along,” said Renee Merrifield, BC Liberal Health Critic. “To knowingly hold back this critical information from British Columbians — especially after so many have been asking for it to be released — is a failure of government.”

The Opposition says that this leaked data “shines a light” on the B.C. communities that have been hardest hit by the pandemic and the party feels the information could have been used to educate the public. 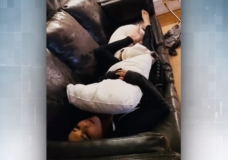 'She wanted out of that lifestyle': Father of 12-year-old who died from overdose calls for change