Posted: Jan. 17, 2020 6:02PM | Last Updated: Jan. 17, 2020 6:07PM
CHEK
WatchAn Esquimalt landlord is going to prison for two years after setting fire to his own rental property. In sentencing 50-year old Wei Li, a BC Supreme Court judge said the crime could have been much worse. Mary Griffin reports.

On Oct. 3, shortly after 10 a.m., a fire started in the garage of the duplex at 318 Uganda Avenue in Esquimalt.

Irene Brett, who was living in the other half of the duplex, couldn’t believe it when she saw smoke coming from the garage.

“I smelt it. And I looked outside, and I saw it blossoming, just billowing,” Brett said.

The year before, Brett sold the property to Montreal resident, 50-year-old Wei Li.

Li then rented the property to Billy Montgomery who was not home at the time.

“I’m not insured at all for any of this. I have no insurance. Everything I own is in there. Everything,” Montgomery said on Oct. 3, 2017.

Thirty minutes after the fire started, Li arrived at the Victoria airport with a ticket to eastern Canada. He asked for help because of burns to his hands, face, and neck.

Suspicious airport staff called the police. When they arrived, they arrested Li.  In October, a jury convicted Li of setting fire to the house, and threatening the health, safety, and property of Montgomery. On Friday during sentencing, the judge found Li deliberately planned the fire, and that it could have spread to other homes.

During the trial, Brett testified Li sent her a text message saying they needed to talk because “someone threatened to burn the house.”  On Friday, Brett says she’s relieved the trial over and that Li is sentenced to two years in a federal prison.

“Really relieved. I wish it was a little bit more. But I’m glad he’s not going to be in the province or around me anymore. It’s been a nightmare,” Brett said.

Li arrived in court with a pink carry-on suitcase, and a backpack, but sheriffs handcuffed him at the end of sentencing. His suitcase will likely follow him to prison. 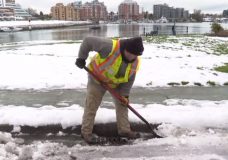 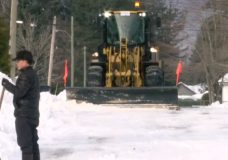