Back home in Ladysmith nurse Kristie Horrelt still feels very moved by what she saw and the people she was able to help as a nurse in Ukraine.

Among them was a woman who had fallen and broken an arm escaping from her home, another was a man injured while in a tank.

“A missile exploded and he escaped with his life but he was burned and we helped him a little bit but it wasn’t in the first day or so. It was a little bit later,” said Horrelt, a nurse since 2010.

Horrelt went into Western Ukraine and served for one month ending April 20th, at a clinic and a field hospital, usually seeing up to 80 people a day.

She served with Samaritan’s Purse Disaster Incident Response Team. The organization is a Christian charity that says it provides spiritual and physical aid to hurting people around the world.

The Ladysmith nurse said her team mainly treated those with secondary health problems related to the war as opposed to those directly injured in the war.

She set up a table with some toys and crafts she brought from Canada for children who came in. It was a space where kids could focus on being a kid again.

“Lots of parents were worried about their kids. They weren’t sleeping. Some older kids were going back to wetting the bed and signs and symptoms of like colds,” said Horrelt.

Horrelt says she was impressed with the bravery of the teen boys and men and the strength of the people fleeing their homes seeking safety.

“I’ve come away from this experience very humbled again by the strength of the Ukrainian people. I met older women whose knees were so sore because they were standing up and cooking for the soldiers all-day,” said Horrelt.

Horrelt says since returning many have asked about how they can help.

“It’s really easy to feel overwhelmed and helpless what can you do but I would say not everybody has to go to Ukraine. I mean everybody is fighting a battle in their everyday life so if we could really get to know someone in our lives a little bit deeper that influence really does carry.”

She urges people to get to know an international student or refugee or simply a neighbour.

Horrelt says she would like to return to Ukraine again, a place that’s part of her ancestry and now also holds a piece of her heart.

Last week, five members of a Ukrainian family arrived in north Nanaimo after fleeing their country. 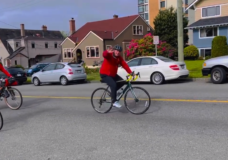 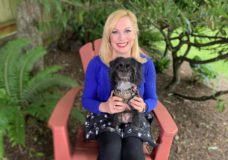