A Transportation Safety Board investigation found that the crew had insufficient training in the safety equipment, and there was insufficient vessel maintenance which contributed to the death of two crew members when a fishing vessel sank near Bamfield in 2020.

On Aug. 11, 2020, the Arctic Fox II started taking on water with three crew members on board approximately 77 nautical miles west-southwest of Bamfield. The investigation into this incident was unable to determine why the vessel began taking on water.

One survivor was found in a life raft and the bodies of the master and other crew member were recovered from the water.

The TSB says the vessel sank on Aug. 13 and was not recovered.

A report on the fatal incident says the master of the ship held an expired Fishing Master, Fourth Class certificate that was issued in 2001 under the now-repealed Marine Certification Regulations. He also had a restricted radiotelephone operator certificate and marine emergency duties A1 training certificate.

Crew member 1 and 2 responded to a job advertisement for experienced crew members for a tuna fishing operation, but neither had commercial marine experience or emergency training.

The investigation into the fatal sinking found the master had not received training on how to conduct an emergency drill and there was no record of formal emergency procedures, drills, familiarization, or training having been provided to the crew members or previous crew members who sailed on the vessel.

Immersion suits, which if properly worn are designed to prevent or slow down the effects of immersion in cold water by keeping the wearer dry and may also provide buoyancy to keep the wearer afloat.

“If immersion suits are not correctly donned and air becomes trapped in the suit’s legs and feet, the legs and feet balloon and float to the surface, which may cause the wearer’s head to become submerged,” the report says. “Some immersion suits have straps around the ankles that, when used, can reduce air pooling in the feet.”

The investigation found the master gave crew members informal instructions on how to put on the immersion suits, but all three people on board were improperly wearing them when they were found.

When deploying the life raft as the vessel was taking on water, the painter line was lost and it was launched in the water without being inflated first. The master jumped into the water to try and inflate it, and crew member 1 did the same. Crew member 1 was able to inflate the life raft once it was in the water and eventually able to get into it.

“The master’s action to retrieve the painter line effectively created a person overboard situation during an emergency abandonment procedure,” the report says. “Without any guidance or procedures for vessel abandonment or persons overboard, crew member 1 jumped into the water without any discussion or plan, and with an improperly donned immersion suit.”

The Arctic Fox II had been used as a fishing vessel for 74 years and had a number of modifications that affected its stability done before 2004.

The report says there is no U.S. or Canadian record that the vessel had undergone a full stability assessment.

In 1993, the previous owner had contacted a UK marine engineering company which conducted a roll period test, which provides a limited measure of vessel stability. The results did not meet the minimum UK stability requirements.

The report says the current owner was not aware of the vessel’s roll period test results.

The owner of the vessel had passed along the duties of running tests for the vessel’s seaworthiness and stability and had compensated him for these tasks.

“Shipyard invoices since 2016 indicate that the master periodically arranged to maintain the vessel’s hull by having it painted, having sections recaulked as needed, and by having the zincs replaced,” the report says. “There were no shipyard records of any inspections done on through-hull fittings, engine room piping or pumps, or the vessel’s structural hull integrity.”

Fishing vessels of the Arctic Fox II’s size are required to be certified by Transportation Canada every four years. The last records of the vessel receiving this certificate was in 2008.

Timeline of the fishing voyage

The vessel had left from Victoria on Aug. 8 for the tuna fishing grounds.

During the 20-hour trip to get to the fishing grounds the master showed the two crew members where the immersion suits were and had both of them try on a suit to ensure they fit. Both crew members tried on the suits but didn’t put the hood on.

The person identified as crew member one experienced motion sickness and remained in the cabin for most of the day on Aug. 9, though periodically came out to help with the catch.

On Aug. 10, he requested the master bring him back to port because he was too ill to stay on board and the master agreed. Near sunset they set a course for Ucluelet.

“The master used a satellite phone to update the vessel owner, explaining that the vessel was heading to Ucluelet in adverse weather conditions to drop off crew member 1, hire a new crew member, and return to the fishing grounds,” the report says.

On Aug. 11 in the early morning water began accumulating in the engine room.

“The master left the wheelhouse unattended and placed the additional portable pump in the engine room, but the water ingress continued and the vessel began to sink,” the report says. “He then ordered the crew members to prepare to abandon the vessel.”

The master then returned to the wheelhouse and broadcast a Mayday call at 1:58 a.m. 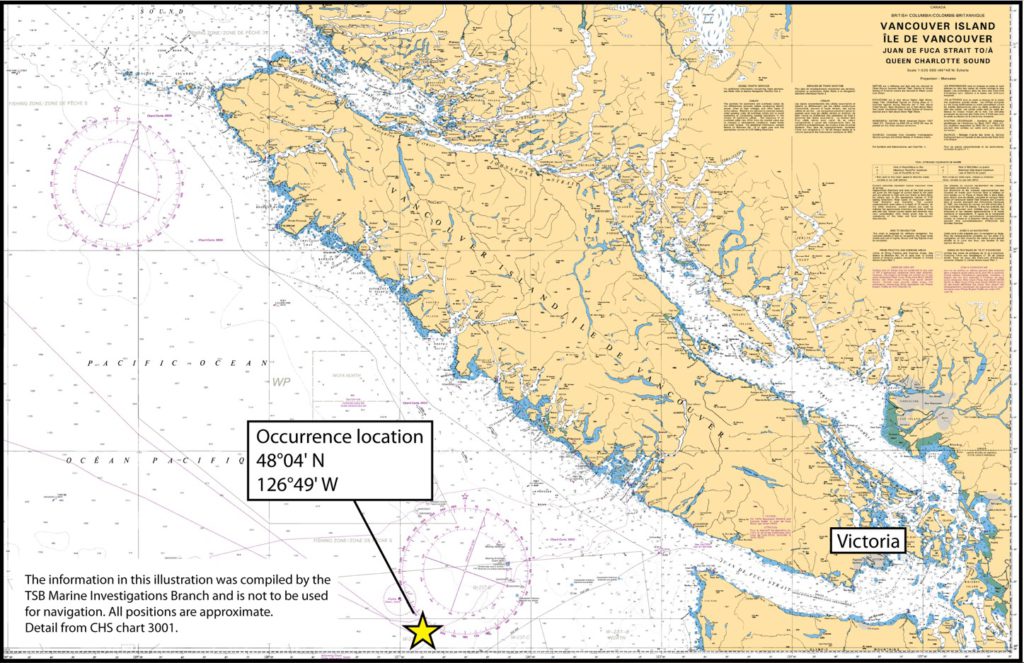 When the master of the vessel broadcast a Mayday call, he indicated the vessel was approximately at 48°04′ N and 126°49′ W. (Source: Canadian Hydrographic Service, with TSB annotations)

Around 2:12 a.m. the U.S. Coast Guard took lead in the search. The Marine Communications and Traffic Services in Prince Rupert was unable to get back in touch with the Artic Fox II until 2:20 a.m., where he said the main engine had been shut off and the crew members were abandoning the vessel.

MCTS reminded the master to have all crew members completely do up their immersion suits and take a portable radio. USCG dispatched an airplane and helicopter to search at 2:24 a.m.

When the crew was attempting to deploy the life raft, it was released from the vessel too early without the crew on board and the master jumped into the sea.

Crew member 1 also jumped into the sea to help the master, but he told the crew member to inflate the life raft. He was able to do so and was able to get inside and turned on his immersion suit’s light.

Crew member 2 then jumped into the sea on the opposite side of the vessel of the first crew member and the life raft. His suit was partially donned and his light was on.

Crew member 1 blew the whistle, and the second crew member responded but was unable to reach the life raft.

Around 4:36 a.m. crew member 1 was rescued by the Joint Rescue Coordination Centre and the bodies of the second crew member and master were recovered around 9:39 a.m. They were both wearing their immersion suits partially donned and they had filled with water. Both causes of death was determined to be drowning. 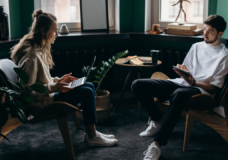 Looking to grow your network? Experts say get out of your head, rely on 'weak-ties' 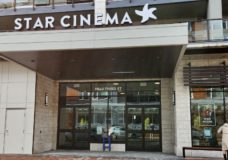 Opinion: The Star Cinema - long may it shine brightly