‘I love it’: Rescued puppies and their mother reunited in Nanaimo one year later

When Elaine Nelson-Hozak brought in an abandoned starving mother dog named “Celeste” and her five tiny puppies who’d just been rescued near death by the Nanaimo SPCA, they were one of the saddest cases that animal cruelty officers had ever seen.

So Nelson-Hozak fostered them with healthy food and her grandchildren’s cuddles until they could find homes.

“She’s just super kind-hearted, and you can just see it in her eyes. I think she’s grateful,” said Nelson-Hozak.

One year later, Celeste, now named “Mama,” has reunited for New Year’s with her puppies and their adoptive families.

“And he’s brought so much joy to our lives. I can’t imagine life without my little horse,” she said, laughing.

“It’s lovely that they’ve all got happy, loving homes. From the story that started to where they get to be now,” said Kelly Jeffs, whose family adopted a puppy they’ve named “Cinnamon.”

According to Nelson-Hozak, this ending to their sad tale was even more than she could have hoped.

“Look at them. They went from this big to all grown up. It’s beautiful,” she said.

All are running and playing together once more in Nanaimo Saturday after one year apart.

“Heck of a story the way they were found in the first place. Like who found them, like how were they even brought in? It was a nice person who did that. For us to get her in the first place, we feel really fortunate,” said Kelly Skarra, who, with his wife Lisa, adopted a puppy named “Izzy.”

Jack Scott and his wife adopted a puppy named “Cali.”

“We are thankful for her every day because she is more than we could ever ask for,” said Scott.

Sean Dehaan and his family adopted a puppy they’ve named “Cinnamon,” who he said saved them right back.

“We had a pretty terrible year of loss, and the following year, the New Year, we got Cinnamon,” said Dehaan.

As for “Mama,” well, she never left Nelson-Hozak’s, with the foster family adopting the now healthy mother dog as their own.

“And we’re grateful, she’s our best friend,” added Nelson-Hozak, helping give the once frightened little family the life of a dog’s dreams. 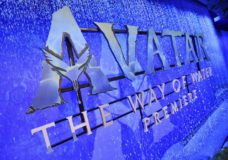 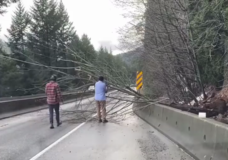 Commuter pulls out chainsaw, cuts up fallen tree snarling traffic on the Malahat