CHEK’s Rob Shaw explains what the province is saying about Ally’s story, and what it’s doing to curb youth overdoses. 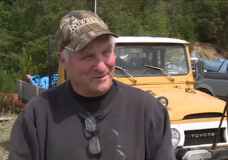