Armed with snowblowers and shovels, neighbours went about digging Chris Taylor out of his Nanaimo street Saturday.

This after an overnight drop of 30 centimetres of new snow stopped him in his tracks from getting to the Nanaimo airport.

“I have a non-refundable flight at 2 o’clock,” said Chris Taylor.

“You know never travel when you don’t need to in this condition,” said the Nanaimo resident.

“But when you have a non-refundable ticket.”

“And just accumulated like you wouldn’t believe… so as you can see around you it’s quite significant.”

Crews were out through the night clearing major routes of snow, and trying to clear storm drains. Since the massive melt of all the snow is expected to start right away.

“Oh absolutely, I never expected to be this much,” she said.

“If you know you have a catch basin in front of your place,” said Myles.

“Clear that. That’ll help prevent flooding your place as well,” he said.

While the snow switched to rain by late morning, the accumulations were enough to bring down trees and branches on power lines, knocking out power to thousands and keeping B.C. Hydro crews busy all day long.

“Power’s out at my mom’s yeah,” said Philip Marie who was visiting from the Lower Mainland when the storm hit.

So Marie went out four by four’ing and found himself in the right place to be a good Samaritan too.

“The conditions are pretty rough. I pulled a few vehicles out of the ditch today early in the morning and they’re pretty rough,” he said.

But the snow proved no match for good neighbours. Together they helped free Chris Taylor of his snowed in status, in time to catch his flight to Ottawa.

A city that unfortunately is now also under a snowfall warning. 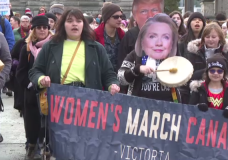 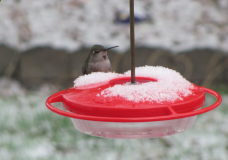 How to help hummingbirds during Vancouver Island's cold snap