The Jake Shearer and the Zidell Marine 277 fuel barge pictured off the coast of the Goose Group Island’s near Bella Bella, courtesy of the Heiltsuk Nation

The Heiltsuk Nation in Bella Bella is relieved for the imminent departure of the Jake Shearer and its fuel barge following a possible environmental incident.

Rough seas caused the Zidell Marine 277 fuel barge to disconnect from its tug boat, the Jake Shearer on Nov. 26.

Shortly after the disconnect the crew dropped anchor and waited out the storm.

The vessel was then moved to the Norman Morison Bay, right next to Bella Bella, where it sat Monday, surrounded by a precautionary fuel boom.

On Tuesday the Earl W. Redd, another tug, arrived to help in journey. The fuel barge passed safety inspections earlier this week and left Saturday, now en route to Alaska.

It was originally reported that 3.5 million litres of diesel and 468,000 litres of gasoline were on board. Heiltsuk Nation officials now say the situation was actually much worse.

“Now that we’re nearing the end of this situation, it’s terrifying to take a step back and think about what could have been,” says Heiltsuk Nation Chief Councillor Marilyn Slett. “Since the fuel barge was towed to safe harbour, it was confirmed that it was carrying four times the volume of petroleum products initially reported. In fact, there were approximately 12.5 million litres of diesel and gasoline aboard, and a single anchor that held them offshore in Sunday night’s storm.”

For context, an average Olympic swimming pool has only around 2.5 million litres of water.

Following the incident Heiltsuk officials met with federal transport minister Marc Garneau on Monday, They are calling for the creation of an Indigenous marine response centre.

“We’ll be relieved to see this vessel out of Heiltsuk waters, and we intend to make sure other vessels like it are regulated out of our waters for good,” says Chief Slett. “Indigenous communities bear the highest risk from marine shipping incidents, and it’s time for our deep local knowledge and stewardship ethic to drive marine emergency response in the region.”

The 130-metre vessel belongs to U.S. company Ziddell Marine. It is chartered to Seattle-based Olympic Tug and Barge.

Canadian Coast Guard officials say that no fuel was spilled during the incident.

In 2016 the tug boat Nathan E. Stewart ran aground west of Bella Bella, and contaminated the waters off British Columbia’s Central Coast with 100,000 litres of fuel. 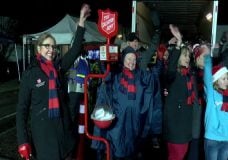 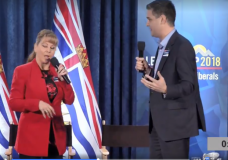