CALGARY — RCMP in central Alberta say a decal that appears to show a well-known teenage climate activist in a sexual act is not child pornography.

The decal bears the logo of X-Site Energy Services below a cartoon figure seeming to depict 17-year-old Greta Thunberg of Sweden.

The company’s general manager, Doug Sparrow, has denied having anything to do with the stickers.

A concerned citizen had called the Mounties and reported the sticker as child pornography.

The general investigative section of the RCMP in Red Deer says it consulted with police experts in the sexual exploitation of children.

It concluded the decal does not include components needed to consider it child pornography nor does the decal depict “a non-consensual act that would be a direct threat to the person.”

“Alberta RCMP do not believe it constitutes a criminal offence,” a police statement said Friday. “As such, Alberta RCMP will not be commenting any further on this investigation.”

The sticker has a black-and-white drawing of a female figure’s bare back with hands pulling on her braided pigtails and the name “Greta” written below.

A torrent of online outrage was sparked when Michelle Narang of Rocky Mountain House, Alta., posted the image on social media Wednesday night. She said she cried when she saw it.

“The visual is jarring,” Narang said Thursday. “It hurt. It hurt on so many levels.”

Thunberg has made headlines for her passionate pleas to world leaders to take tougher action on cutting greenhouse gas emissions and for inspiring large climate marches around the world.

She joined thousands in a march through downtown Edmonton in October. Oil-and-gas industry supporters showed up, but they were vastly outnumbered by the climate marchers.

This report by The Canadian Press was first published Feb. 28, 2020 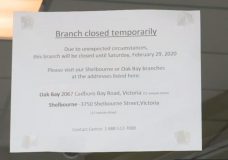