A UVic grad student who’s fought many times in his life in the kickboxing ring is having to fight a different battle after being diagnosed with cancer.

International UVic grad students Majid Kashefiana and his wife Zhina Hadisi were the pictures of health and happiness just weeks ago.

After getting his first shot of a COVID-19 vaccine several weeks ago, however, Zhina said Majid didn’t feel right.

“He began experiencing some shortness of breath and tiredness after three or four days,” she said. “We thought it might be side effects of vaccination, but it got worse.”

He didn’t improve after more than a week, so they went to the hospital. A biopsy and sampling revealed Majid has lymphoma cancer.

Now at Vancouver General Hospital, Majid is fighting for his life undergoing treatment for a tumour over his lungs and heart.

The UVic alumni, however, has fighting in his blood.

When he was 18, he was in a car accident that left him paralyzed and doctors told him he’d never walk again. Three years of hard work later, he battled back, winning a gold medal in kickboxing at a national tournament in Iran.

As an international student, Majid is not eligible for any type of government aid, however, another UVic grad student, Meitham Amereh, set up a GoFundMe account for Majid. The funds will be used to finance the six months they’ll have to stay in Vancouver during his treatment.

“I know it’s a really terrible, terrible situation. Any small financial support for, even if it’s very small, can make a great hope for him,” said Amereh. “I know Majid, I know he’s a fighter.  He has recovered from a car accident a long time ago. He never gives up.”

The GoFundMe fund is now more than halfway through the goal of $60,000 and the Victoria Iranian-Persian Cultural Society is helping the couple as much as possible.

“It’s going to be six months of aggressive chemotherapy for Majid so we’ll help them as much as we can to support them,” said Mohammed Reza Nabizabeh of the Victoria Iranian-Persian Cultural Society.

Adding to all the emotions, they learned just days before the diagnosis that’s Zhina is pregnant, but she’s confident they’ll be celebrating the news soon.

“I really believe in Majid. He’s really a strong one,” Zhina said. “That’s why I’m really hopeful he can recover very soon, and just get back to normal life.” 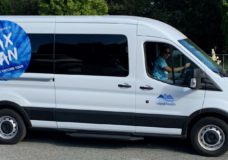 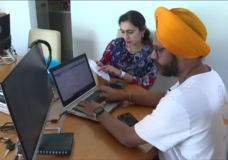