There was a vigil on Gabriola Island this afternoon in support of a summer camp for children.

One of the buildings at Camp Miriam was recently spraypainted with some disturbing anti-Semitic graffiti.

The most disturbing graffiti has been covered up but it included eight swastikas and other disturbing messages.

“To have something like this happen is disheartening,” said Chris Elliston, the camp’s Caretaker.

“My reaction was anger at first.”

Elliston says he discovered it on December 21st and he reported it to the RCMP immediately. He believes it happened sometime in the two weeks prior.

Camp Miriam is an 8-hectare property home to a Jewish summer camp for children who have completed grades 2 to 11.

Its alumni include actor Seth Rogen who appears in the camp’s promotional video. In it, he urges kids to go to the camp “cause I did and for many other reasons included in this video.”

Elliston says to see a swastika on a camp building is extremely hurtful.

One of the camp’s volunteer board members says he was horrified and shocked by the graffiti because it flies in the face of what they teach campers each summer.

“For inclusiveness, for justice, for fairness, for love not hate and this is against [it] all so it hurts,” said Gideon Levit.

Thursday afternoon more than 100 people arrived at the camp for a candlelight vigil in a show of support.

“It’s important that we just show solidarity with each other and show support over the holidays,” said Scott Colbourne, one of the Gabriola Island Lands Trust Trustees.

“It’s a really welcoming inclusive community and I think this sort of turn out shows you that.”

“I am blown away. They just keep coming up the hill and it is really heartwarming,” said Leah Levi, Camp Miriam’s Registrar.

While addressing those at the vigil camp volunteer George Mate said, unfortunately, we’re in a populist era where hate crimes are on the rise but he says it’s incredible “to see so many people saying no we don’t embrace this.” 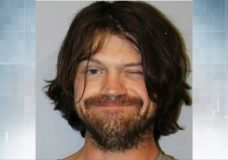 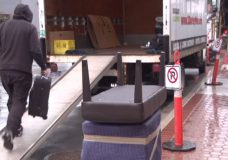 Still no update on repairs for unsafe Langford apartment building