Al Schmegelsky hasn’t heard from his 18-year-old son Bryer since he received a text message from him 10 days ago. In it, the Port Alberni teens tells his dad he’s going to Alberta with his friend Kam and won’t have internet access.

“It’s possible they are now in an area without cell coverage however we have found their vehicle and are not able to locate either of them at this time,” said BC RCMP Cpl. Chris Manseau.

The teens were last seen at the general store in Dease Lake in northern B.C. last Thursday afternoon. Their burned-out vehicle, a truck with camper, was found the next day 50 kilometres south, and two kilometres south of there a man’s body was found at a highway pullout.

Police have released a sketch of the deceased man as they try to identify him. He’s between 50 and 60 with a grey beard and hair. RCMP say they don’t know how, or even if, the death is connected to the teens disappearance.

And police aren’t ruling out a possible connection with the shooting deaths of two tourists on the Alaska Highway, about 470 kilometres from where the teens’ burned-out truck was found.

“It’s unusual to have two major investigations undergoing of this nature in northern B.C. at the same time so we recognize there is a possibility that these could be linked,” said BC RCMP Sgt. Janelle Shoihet.

One week ago the bodies of 23-year-old Australian Lucas Fowler and his American girlfriend, 24-year-old Chynna Deese, were discovered on the remote highway.

Police released a sketch of a man they’re hoping to talk to in that investigation. They insist he’s not a suspect but was seen talking with Fowler the day before the couple was found dead.

New surveillance video shows the couple embracing as they fill up their van at a Fort Nelson gas station on July 13.

“It’s a love story that’s ended tragically, it’s the worst ever love story because we now have two young people who had everything ahead of them tragically murdered,” said Lucas Fowler’s father Stephen Fowler, who is a police officer in Australia.

Back on Vancouver Island, Al Schmegelsky is still holding on desperately to hope.

“I’m saying as a dad, those two boys are still out there, go find them,” he said. 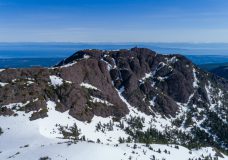 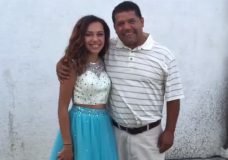