Families want more time with loved ones in long-term care

January 20, 2021 updated
CHEK
WatchLong-term care designation for essential visitors is difficult according to family members who want more time with their loved ones.

Dot Finnerty proves age is no barrier to enjoying oneself.

At the age of 100, she still enjoys a good sandwich and a tune.

Her daughter, Brenda Brophy, moved her out of her long-term care home in September after Dot fell and broke her ribs.

“She was down to 68 pounds, was not herself anymore.”

The facility rejected several applications Brenda made to be her mother’s essential visitor, a designation allowing longer, more frequent visits.

“She is happy, she is thriving and she is doing incredibly well under the circumstances,” said Brenda, adding that her mother has gained ten pounds since moving in with her in September.

It’s a familiar story to many, including Jeanette Harper, whose mother 89-year-old Marguerite Bell lives at Eden Gardens long-term care facility in Nanaimo.

Last year, Harper started the first of several requests to become an essential visitor, all denied.

“It is very frustrating. Because it really illustrated how much power the directors and managers in the care homes in British Columbia have been given,” she said.

On Monday, Health Minister Adrian Dix said there is a process to appeal the decision if they don’t agree.

“We also have a process by which people can appeal if they don’t agree with the decision about whether a visit is essential,” Dix said.

Harper appealed to Island Health’s Patient Care Quality Board, and on Tuesday afternoon received an email informing her she is now her mother’s essential visitor.

However, a group of family members says they will take their fight to court.

Brenda Howard’s mother lives in a facility in the Fraser Valley and said her sister has been refused the “essential visitor” designation by the long-term care facility several times.

“There is a large group of concerned families that do believe that our rights are being infringed upon. The BC Civil Liberties Association is behind us,” said Howard. 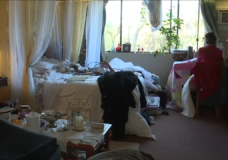 From opportunities to challenges: A closer look inside one of Victoria's 'homeless hotels'

B.C. extending state of emergency due to COVID-19